We have a strong following for Leica Cameras. We offer a free valuation service to people who are considering the sale of their items through our auction room. Click the button to complete our short form, and one of our valuers will be in touch.

In the decades following the taking of the first permanent photograph in 1826 by Joseph Nicéphore Niépce, there had been several major innovations in the field of photography. Cameras, however, were still bulky and heavy, and it was difficult to capture action shots. In 1911, German optical engineer Oskar Barnack was appointed research and development manager at the firm of Ernst Leitz, who made microscopes. A keen photographer, he’d already had the idea of reducing the size of the negatives and enlarging the photographs afterwards, which would enable a smaller camera. He completed the prototype of his new still picture compact camera in 1914, and named it the Ur-Leica, from ‘Leitz camera’. The original prototype is still in a safe at Leica Camera AG. The camera, now known just at ‘Leica’, went into production in 1925, fitted with a 50mm f/3.5 lens designed by fellow Leitz employee Max Berek. Oskar continued to refine his camera, adding an integrated rangefinder in 1932, which remained a feature of Leica cameras until 1957. Many innovations followed, including the Leicaflex SL, the world’s first single-lens reflex camera, introduced in 1968. The company is still trading today as Leica Camera AG, and is still manufacturing high quality cameras for different markets.

Early model Leica cameras are things of beauty, precision engineered and of interest to collectors from both a technical and a historical point of view. From the beginning, Leica cameras came with a warranty card so that customers could upgrade to the latest version. Many customers did so, meaning that many very early cameras from the 1930s were returned to Leica and are no longer on the market, making them extremely rare. Although these very early models are the ‘gold standard’ for collectors, other items of interest including good examples of M models from the 1960s and 70s, original copies of the Leica magazine, the 1938 book ‘The Leica book in colour’ by photographer Anton F. Baumann, and any original advertising material.

The value of Leica cameras is still largely dependent on the age, rarity and condition of the individual piece. The most sought after are those in perfect technical order with working shutters and, ideally, original cases and documentation. Original finish can greatly affect the value of a piece. 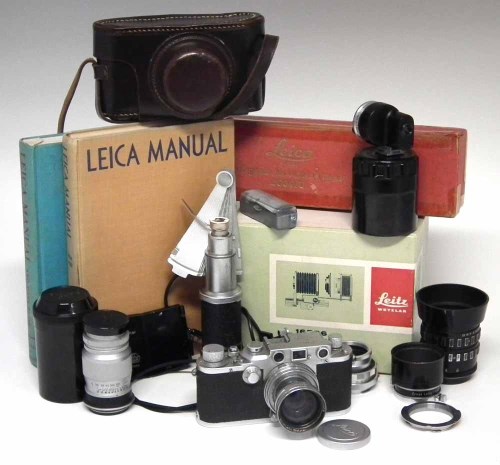 Leica III C and equipment as per list provided.
Sold for £300 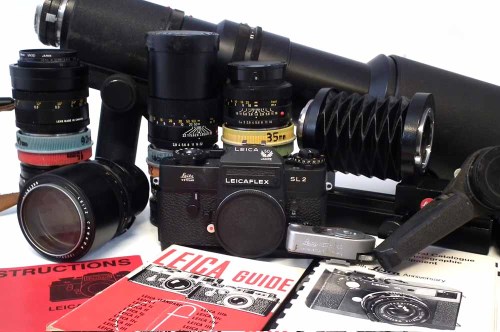