We have put together this Silvermiths Directory to provide you with information on the makers and items we regularly sell in our Fine & Classic as well as 20th Century Design auctions. Click an entry to find out more information on each maker and to see the pieces we have recently sold and prices achieved. 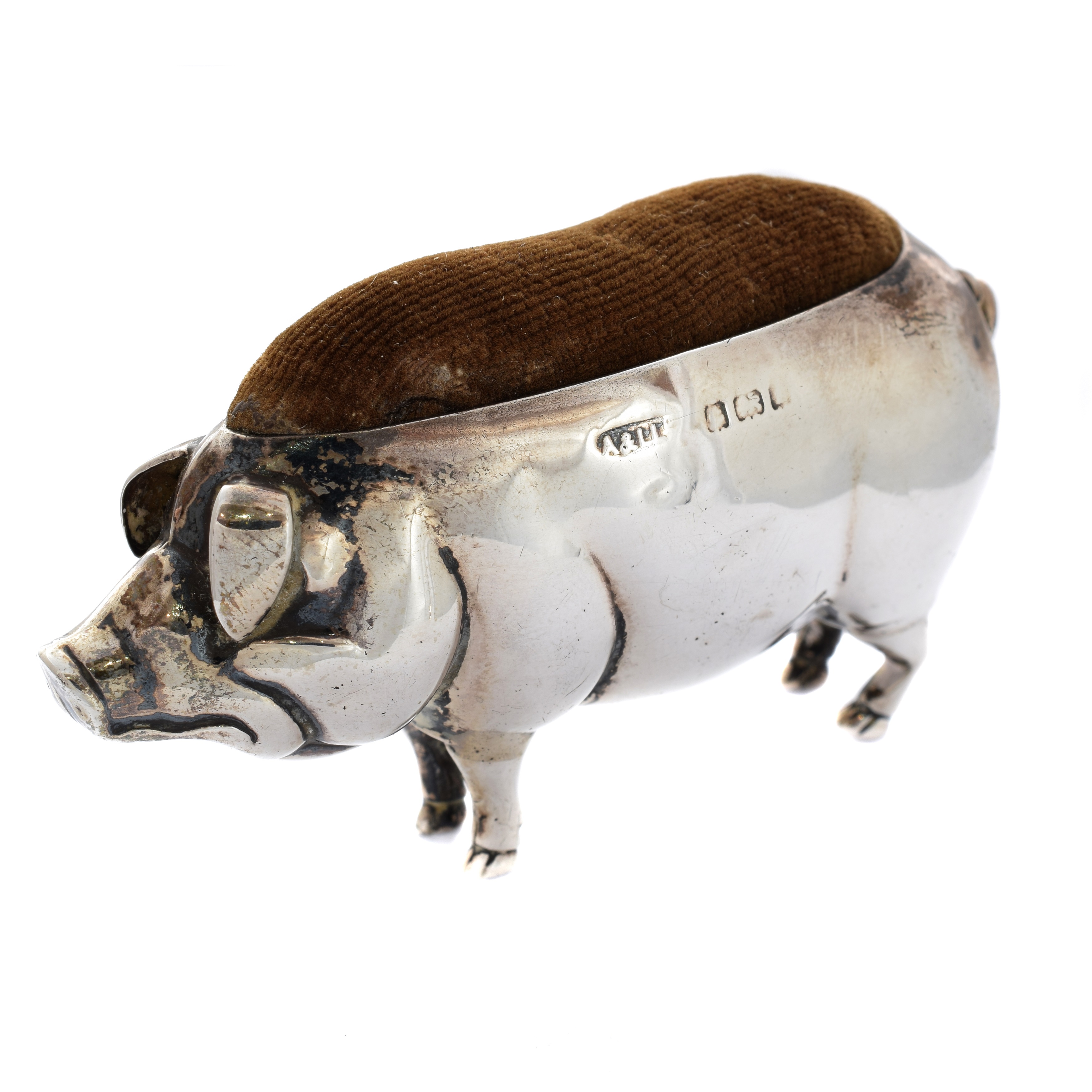 Adie & Lovekin were a Birmingham based silversmiths, renowned for their novelty silver items. Novelty pin cushions, rattles, shakers, bokmarks and nurses buckles by this firm sell well at auction, with top hammer prices achieved for novelty pin cushions in the form of dogs, bears, cats, rabbits and lions. Based in Snape Street, Birmingham, the firm became Adie & Lovekin Ltd in 1889. Adie & Lovekin registered several marks at both the Birmingham and Chester assay offices from 1879 onwards, varying from A&L, to A&LLD, to ALLD.

Albert Edward Jones was a noted Arts & Crafts silversmith, firmly believing that "a piece of silverwork, to be really interesting, must be endued with a Spirit of Art." Often referred to as A.E.Jones, his pieces have a distinct Arts & Crafts style, sometimes bearing his sponsor's mark A.E.J in an oval surround. However much of his work was unmarked, and is recognisable by his distinct, crafts-driven and ecclesiastical style. A Midlands maker, he studied his craft at Birmingham and shared his design ideals with prominent figures such as Cuzner and Gaskin, cementing his place as one of the key Arts & Crafts silversmiths of the early 20th century. 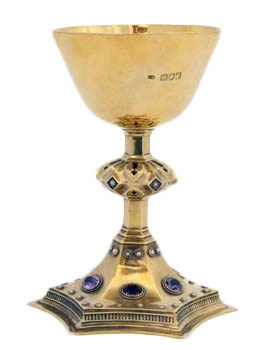 Carl Krall silver is highly popular at auction, its appeal owing to the master silversmithing techniques, opulent designs, and gem-set or enamel accents to most pieces. Almost exclusively religious items such as chalices, ciborium, pyx boxes, pieces by Krall fetch fantastic prices under the hammer. Carl Christopher Krall was a German silversmith, trading from Regent Street in London from around from around the 1860s to the 1930s as Barkentin & Krall. 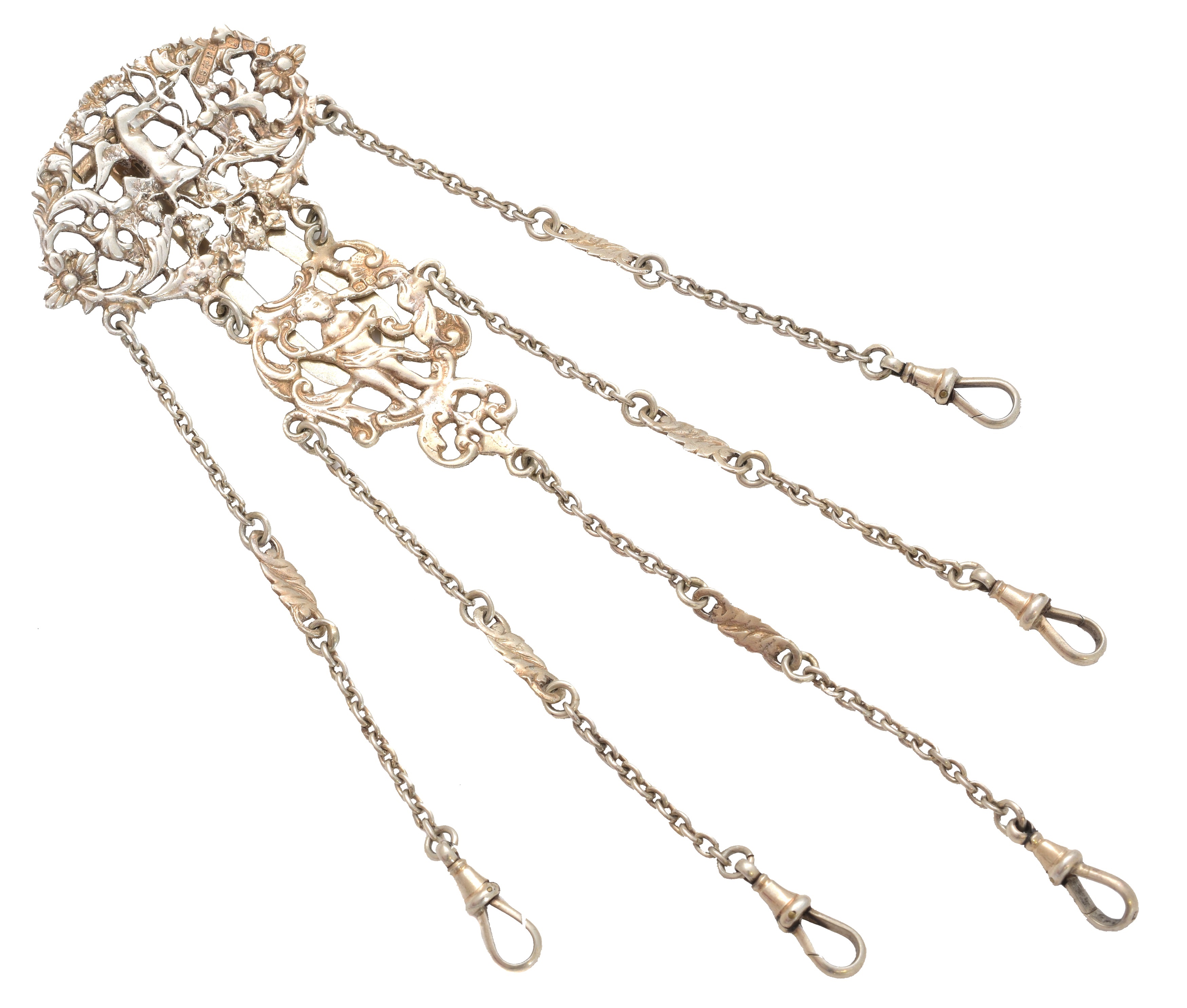 Cornelius Desormeaux Saunders & James Francis Hollings Shepherd or Saunders and Shepherd were a manufacturing jewellers and silversmiths founded in London in 1869 and have continued to the present day. Opening branches in London, Chester and Birmingham, the company were hugely successful and registered as a limited company in 1916 as Saunders, Shepherd & Co. Ltd. 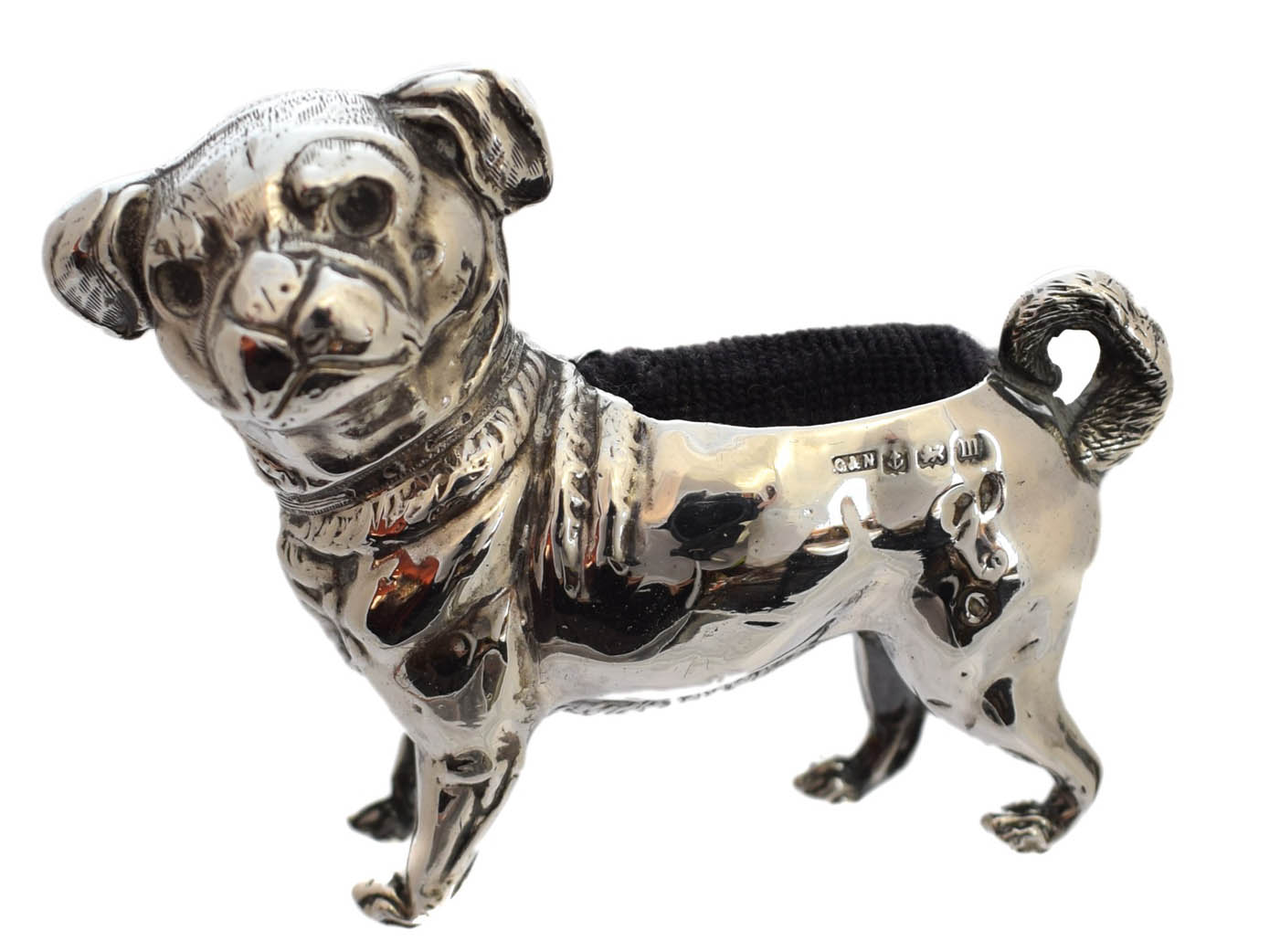 Crisford & Norris silver is highly sought-after at auction, owing to their unique and novel designs. Pin cushions, rattles, boxes, compacts, napkin rings and trophys were all manufactured by this Birmingham based silversmiths, operating from 1896 to 1976 from their Vyse Street workshop. With their sponsor's mark a C&N within a rectangular surround, these collectable pieces always sell well under the hammer. 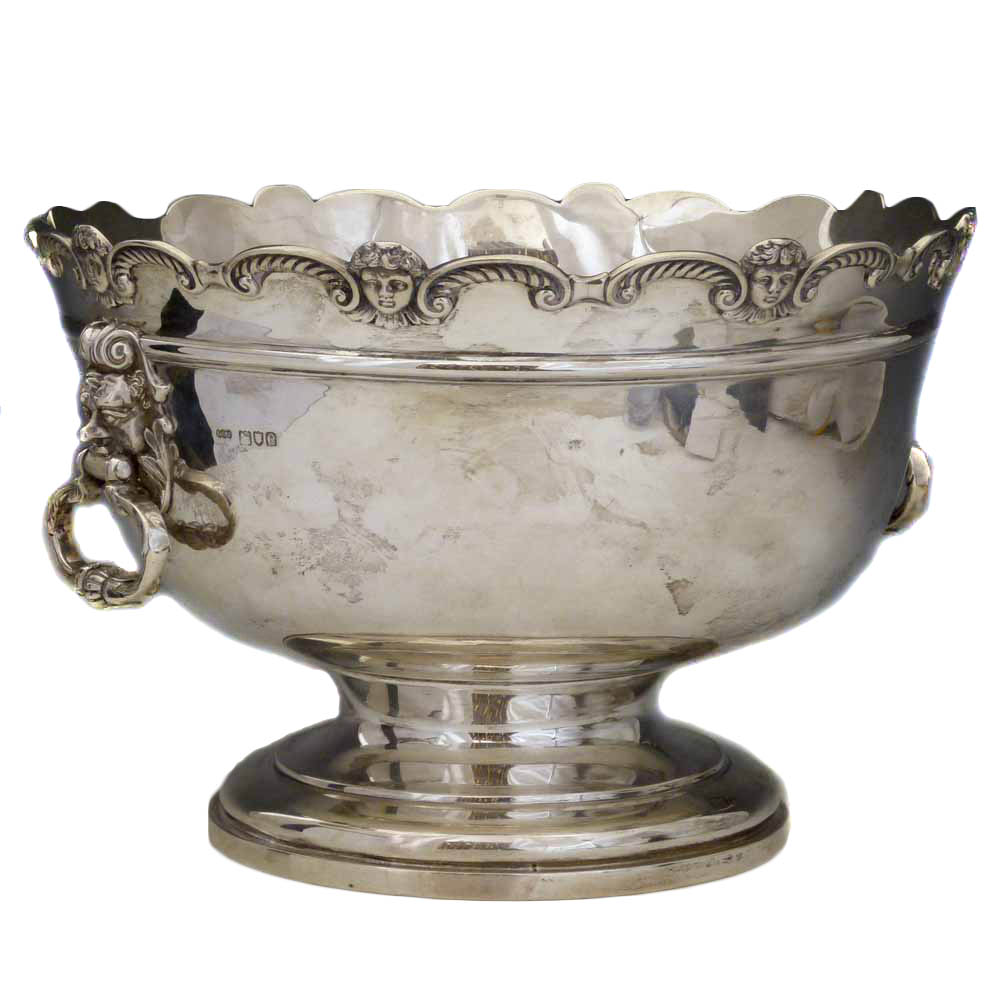 Elkington is one of the most important silversmiths of the 19th and 20th centuries. The firm was founded by brothers George Richards Elkington and Henry Elkington in 1836. Based in Birmingham, the brothers experimented with gilding and electroplating techniques. By 1840 production of silver electroplated pieces was underway and was extremely successful in this venture. In 1885 Elkington registered designs by Christopher Dresser, these pieces in particular sell exceptionally well at auction and command high prices. 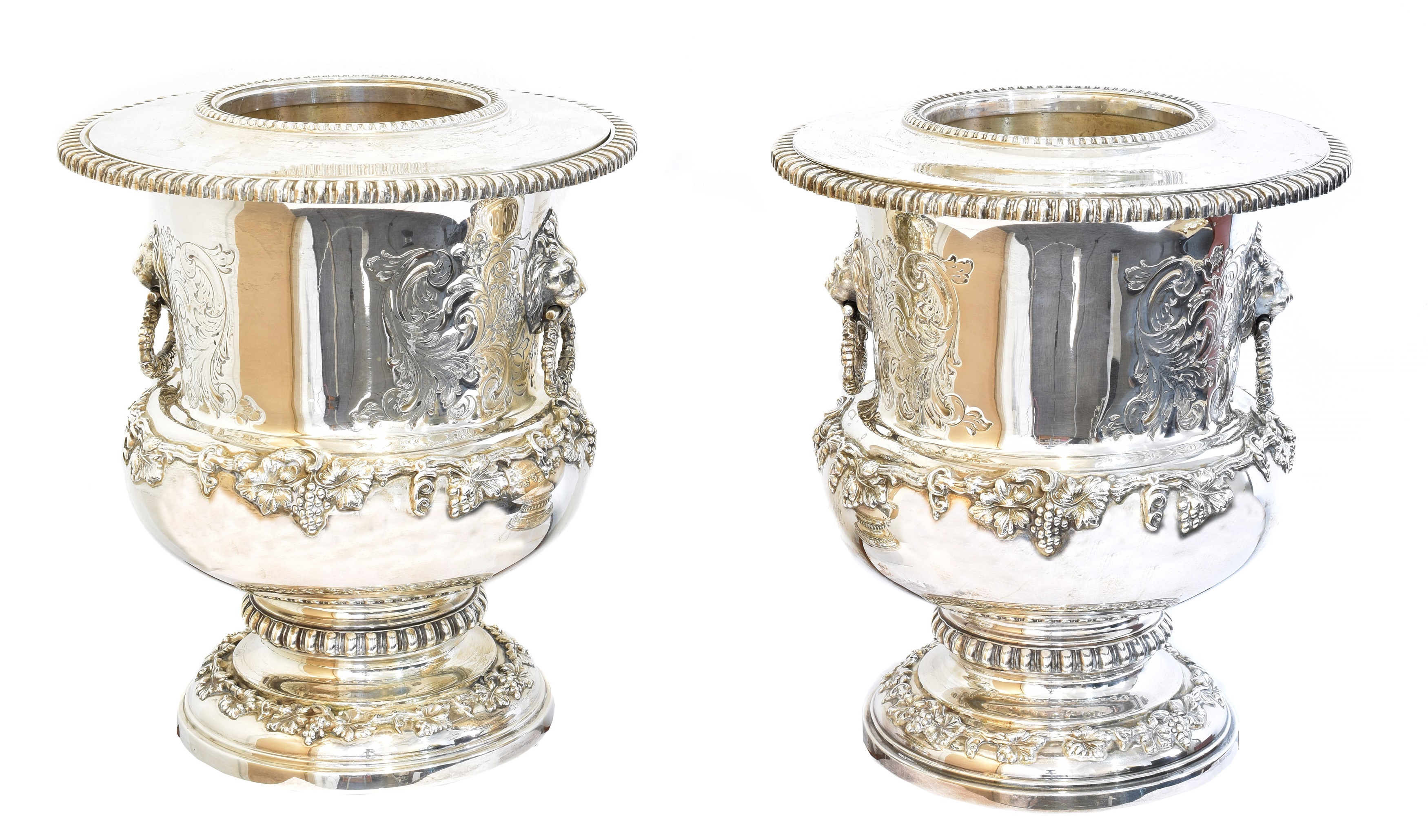 Garrard was founded by George Wickes in 1735. Wickes was a talented silversmith and produced several commissions for aristocratic patrons. In 1792, the firm was taken over by partners John Wakelin and John Garrard, whose name the company retains. In 1843 they were bestowed the title of Crown Jewellers to Queen Victoria and have held this with six successive monarchs ever since. 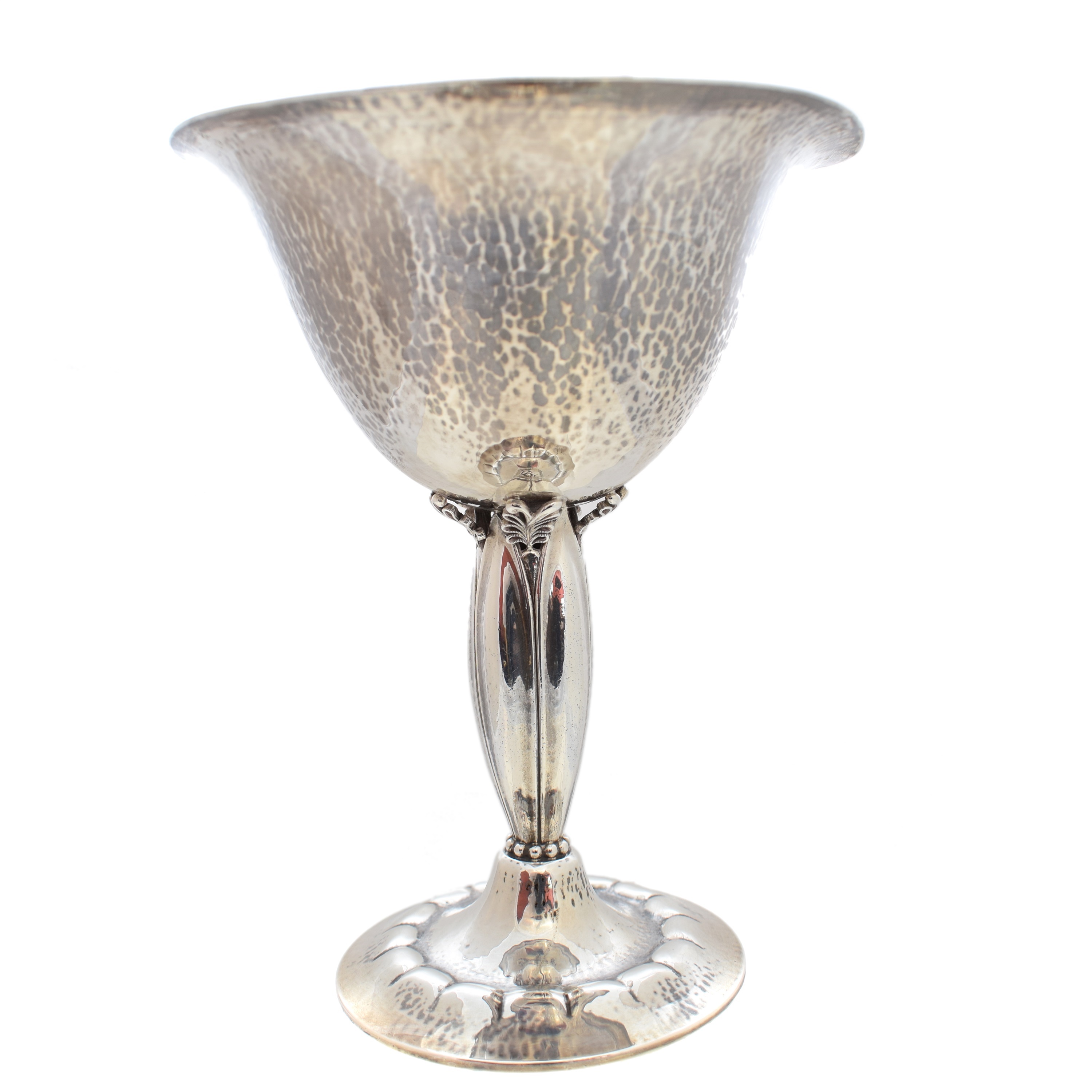 Georg Jensen was born 1866 near Copenhagen; he was from a working-class family and had little formal schooling, however, at the age of 14 he became an apprentice to a goldsmith. His real love was sculpture, which he went on to study at Copenhagen’s Royal Academy of Art.Jensen set up his own shop in Copenhagen in 1904. Although he later became famous for his flatware (cutlery) and hollowware (bowls, jugs, tea sets), he started off making small pieces of jewellery as he couldn’t afford large stocks of silver. 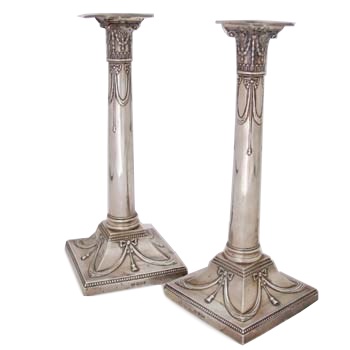 Goldsmiths & Silversmiths Co. was a silversmiths and retail jewellers established in 1880 by William Gibson and John Lawrence Langman.  The firm was based at 112 Regent Street in Longon, with manufacturies in Sheffield, Paris, and Clerkenwell. The firm retailed in gold, silver, jewellery, plated ware, watches and clocks. When the firm was established, the hallmarks registered bore the initials of the partners WG and JL in a shield shape, and in 1898 the firm became the Goldsmiths & Silversmiths Co Ltd with a corresponding hallmark 'G&SCo. Ltd' resgistered. 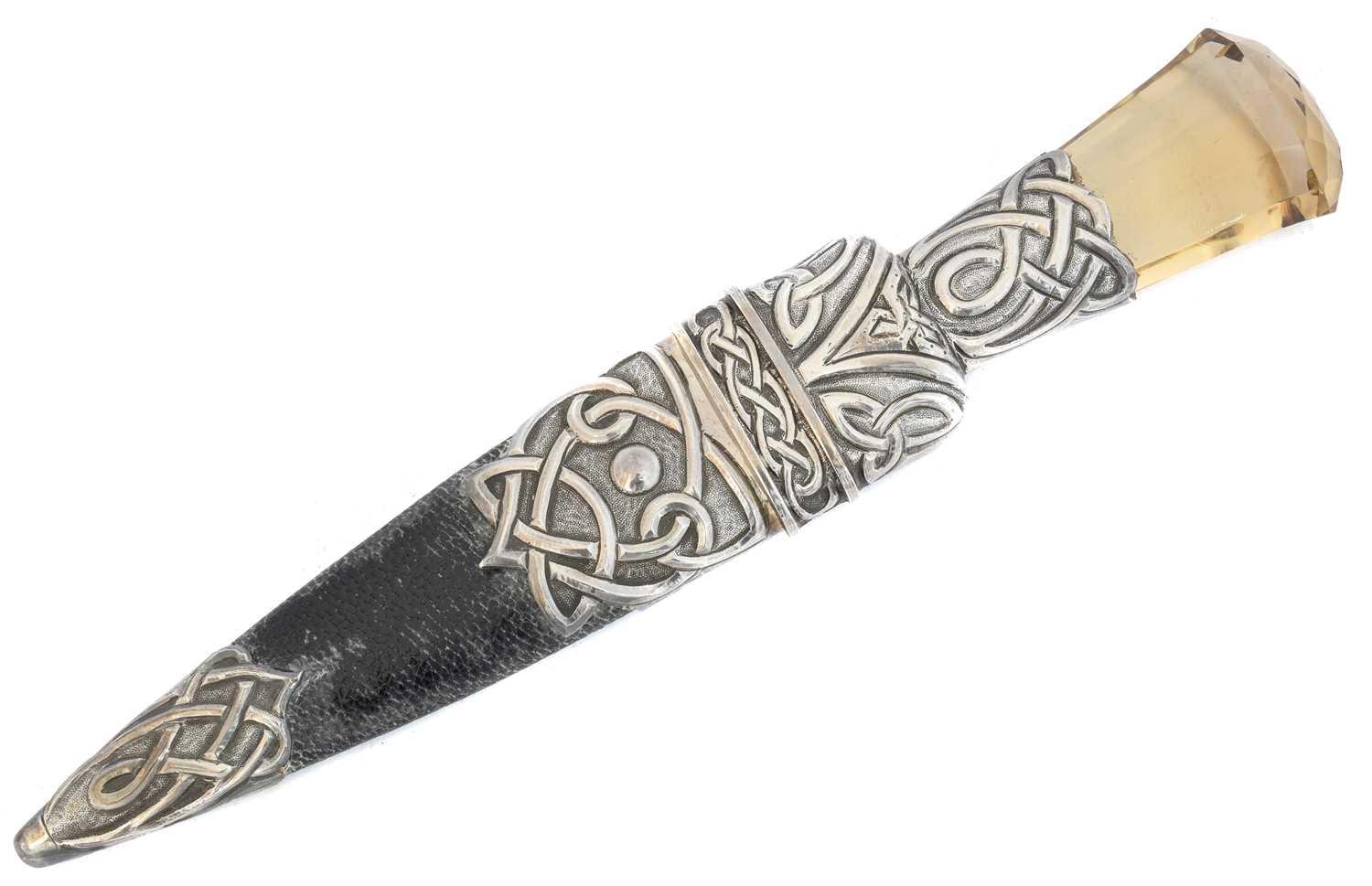 Hamilton & Inches was founded by Robert Kirk Inches and his uncle James Hamilton at Prince’s Street in Edinburgh in 1866. The leading silversmiths and jewellers of Edinburgh, the company was soon recognised by Queen Victoria in 1893 with a Royal Warrant. The only Scottish manufacturing silversmiths company that can trace roots back to the 19th century, this highly reputed firm continue to create breathtaking pieces that attract the attention of collectors at auction. 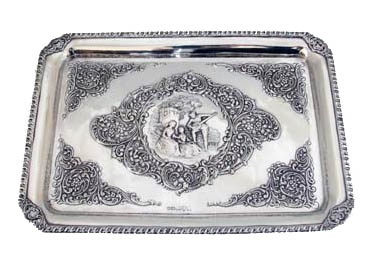 Henry Matthews was a Birmingham based silversmith and jeweller. First registered in 1894, Matthews is known for his small silver items featuring beautiful detailing. Pieces include brushes, cigarette cases, frames, card cases and buttons. Matthews also produced jewellery in the style of the day, and all of his pieces bear his makers mark ‘H M’ together with the Birmingham assay mark of the anchor. 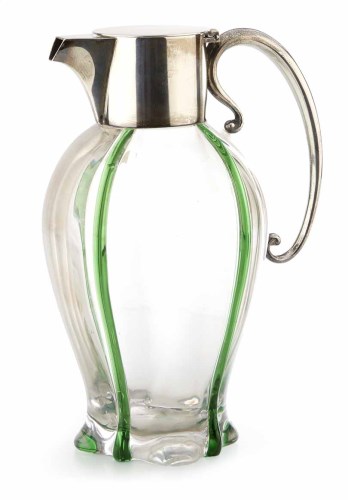 Established in Birmingham in 1855 by Jonathan Wilson Hukin and John Thomas Heath, the firm of Hukin & Heath were manufacturing silversmiths and electroplaters. They registered their first hallmark at the Birmingham Assay Office in 1879, followed by their first London mark in 1879. Hukin retired in 1881, but his partner - John Heath - continued the business with a third party, John Middleton. The firm is probably best known for its association with the hugely influential designer Christopher Dresser, and produced his designs between 1879 and the turn of the 20th century. In addition to Dresser’s designs, Hukin & Heath stocked Oriental-inspired goods plated in gold and silver, genuine Oriental art and pottery by firms such as Doulton Lambeth, mounted in metal. 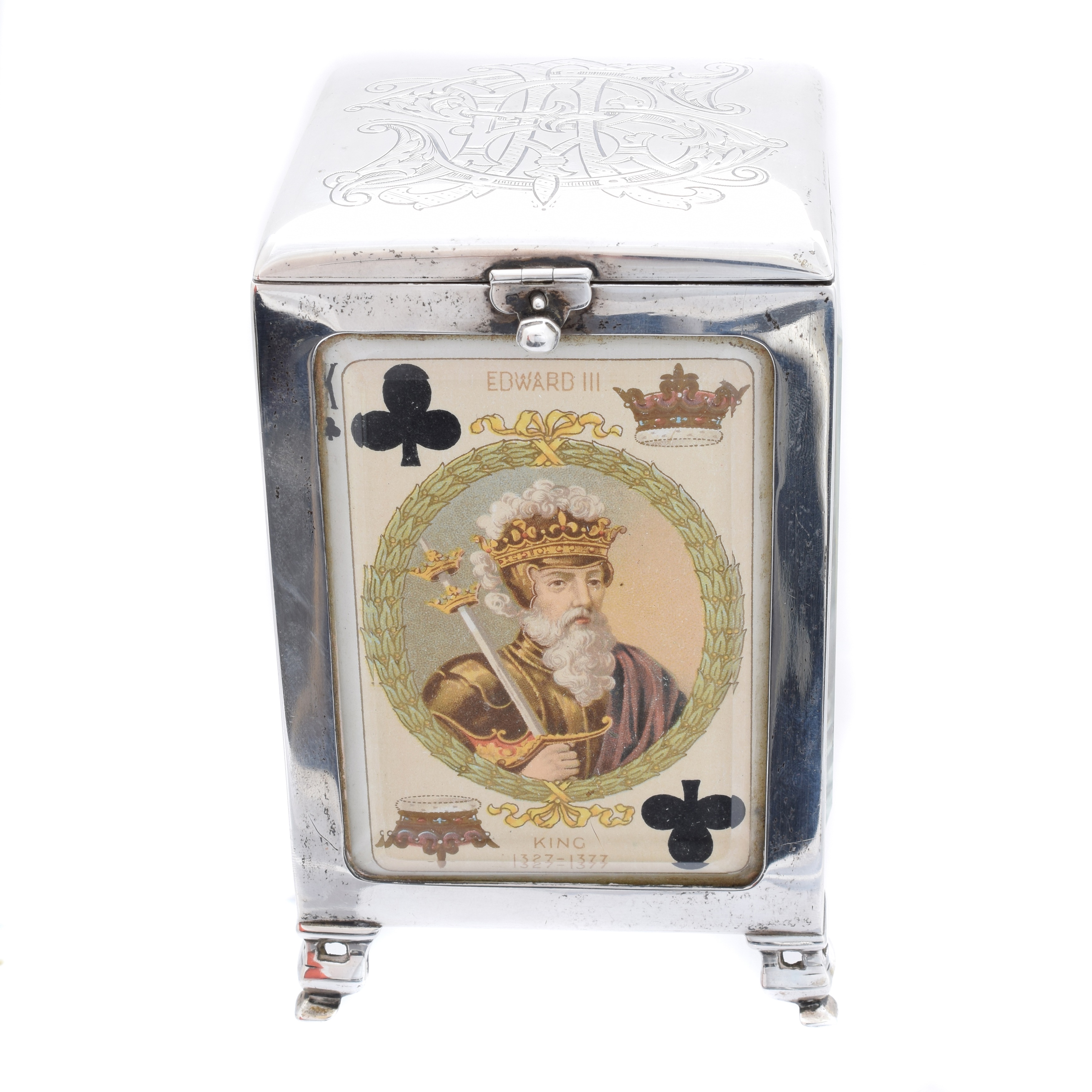 Phineas Harris Levi and Joseph Wolff Salaman founded their silversmithing business in 1870. Operating from Birmingham, the pair continued to manufacture silver jewellery and novelties. In 1878 Levi & Salaman bought Potosi Silver, a manufacturer of silverplated flatware. On 1910 Levi died and the firm was made a limited liability company, trading as Levi & Salaman Ltd. In 1921 Levi & Salaman Ltd and their subsidiary firm Potosi Silver Co were merged with Barker Brothers (Silversmiths) Ltd. The range of production from this wonderful firm attracts a huge amount of interest from silver collectors at auction, with unique pieces achieving  fantastic results. 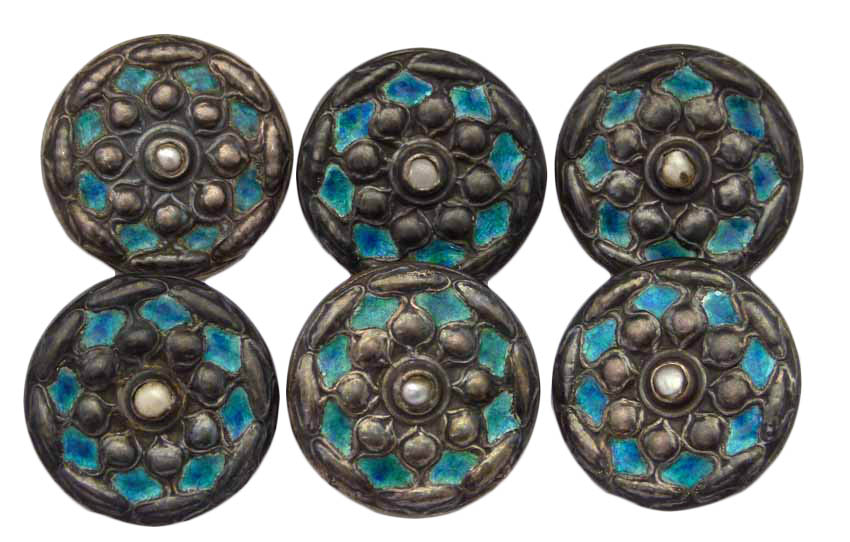 Arthur Lazenby Liberty opened his now infamous department store in 1875, with a view to import and retail oriental fabrics. By 1899, Liberty decided to manufacture a range of domestic silver, employing the best designers of the day, marketed as 'Cymric.' Designers that contributed to the 'Cymric' collection included most famously Archibald Knox, Bernard Cuzner, Jessie King and A.H. Jones. 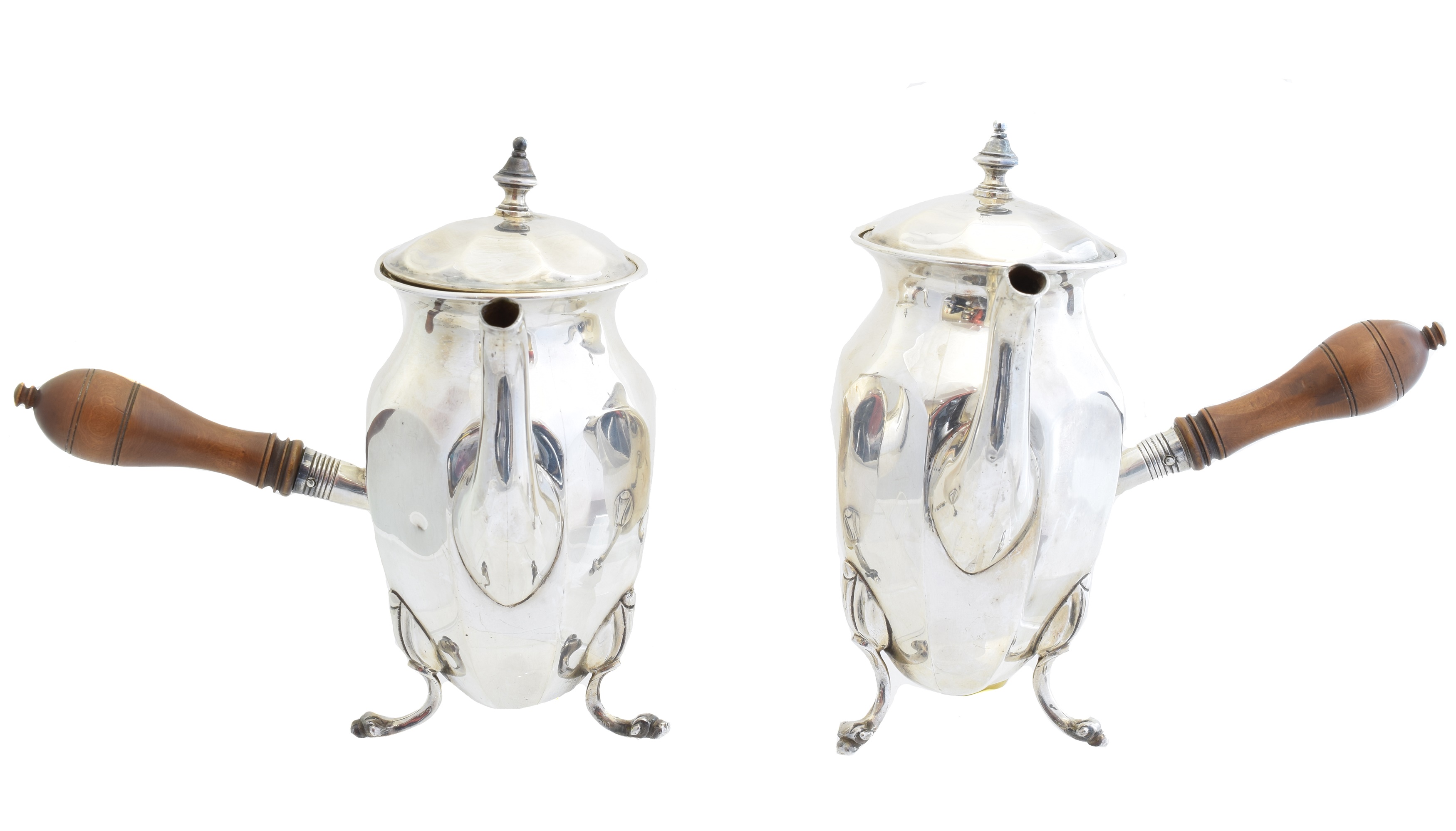 Mappin & Webb traces its roots to a silver workshop founded in 1775 in Sheffield. With over 240 years of significance in the world of silver and fine jewellery, it is no surprise that they are classed amongst the finest the UK has to offer. Indeed, the company has held Royal Warrants to the British monarchy since 1897 and continues to produce breathtaking silver and jewellery to the present day. 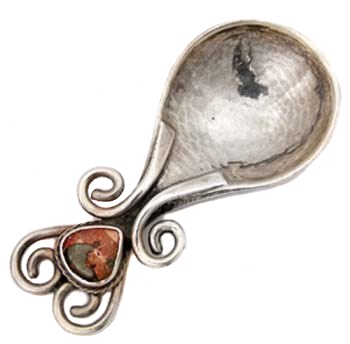 Omar Ramsden was one of the leading designers of silverware in England. Born in Sheffield in 1873, he spent several childhood years in Illinois, USA before returning to the UK in 1887 where he was apprenticed to a firm of silversmiths. Having picked up some of the technicalities of his trade, Omar went to the Sheffield School of Art and won a number of awards and prizes; it was whilst at the art school he met Alywn Carr - with whom he was to form one of the 20th century’s most successful silversmith partnerships... 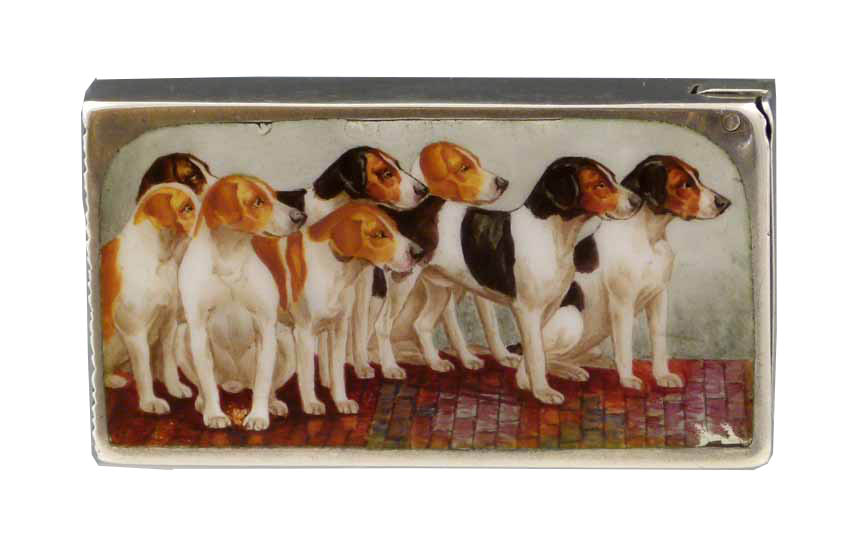 Sampson Mordan (1770-1843) established his business in 1815. Sampson Mordan is renowned for his development of the mechanical pencil, patented in 1822. He entered his first mark with the London Assay Office in 1823, consisting of an 'SM' in a rectangular surround. Between 1824 and 1836, Mordan entered a partnership with Gabriel Riddle, registeing a new mark of 'SM.GR.'  Following the dissolution of this partnership, Mordan continued the business as S. Mordan & Co until his death in 1843. Throughout the 19th century, Sampson Mordan gained more than 160 patents for mechanical pencils, which sold exceptionally well. As well as the pencil side of the business, Sampson Mordan specialised in small silver and gold items, such as vesta cases, menu holders, claret jugs, vinaigrettes, scent bottles etc. 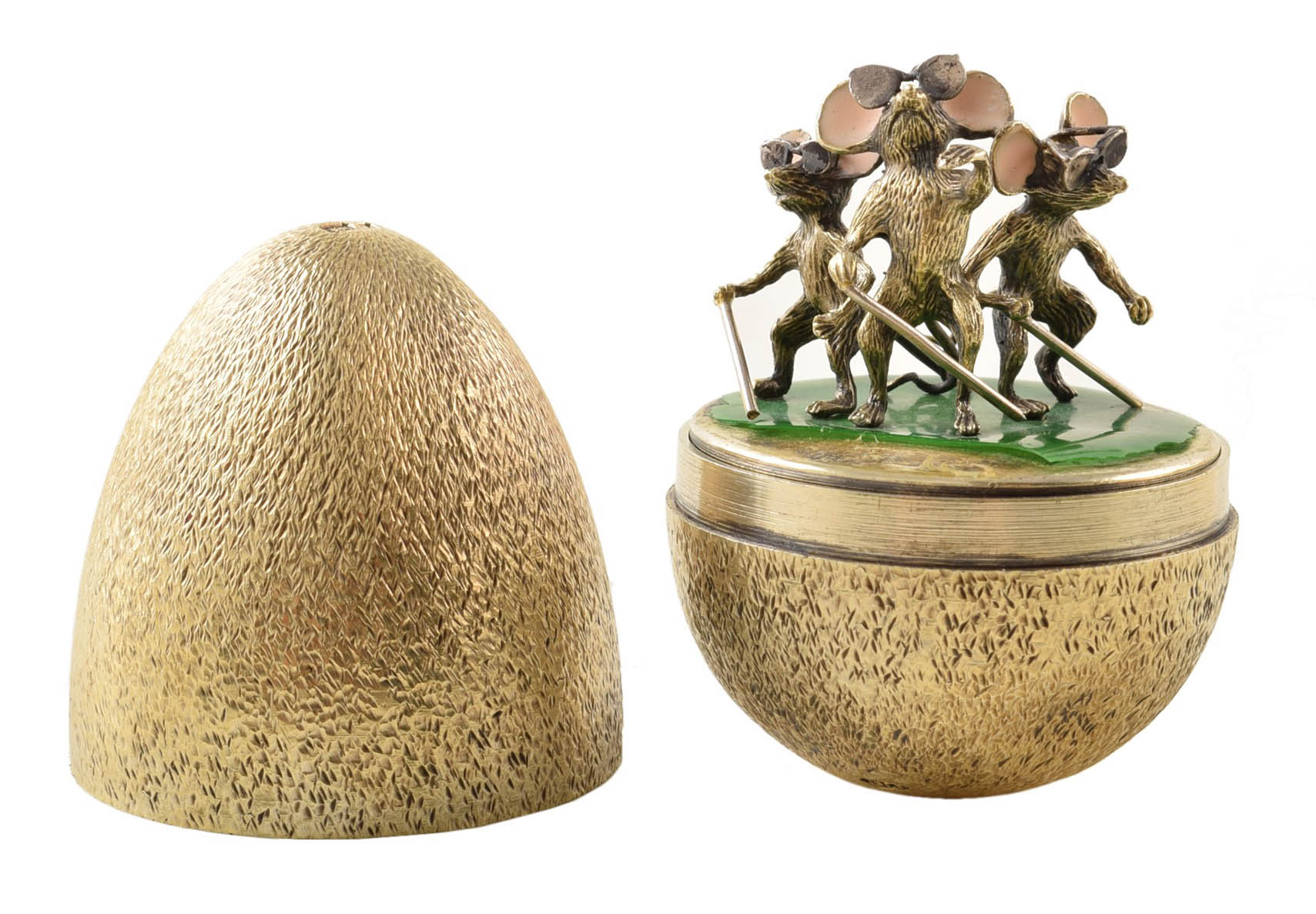 Stuart Devlin was born in 1931 in Australia. In 1960, he came to study at the Royal College of Art on a scholarship. In 1965, when he opened his first workshop, after gaining acclaim in his native Australia after winning a competition to design Australia's first decimal coinage and supervising the cutting of the dies at the Royal Mint in London prior to their launch in 1966. Devlin's initials can still be seen on the reverse of the Australian 1966 50 cent coin. Using his prize money from the competition, Devlin bought a house in Clerkenwell, London, and created a basement workshop to begin his goldsmithing and silversmithing business. 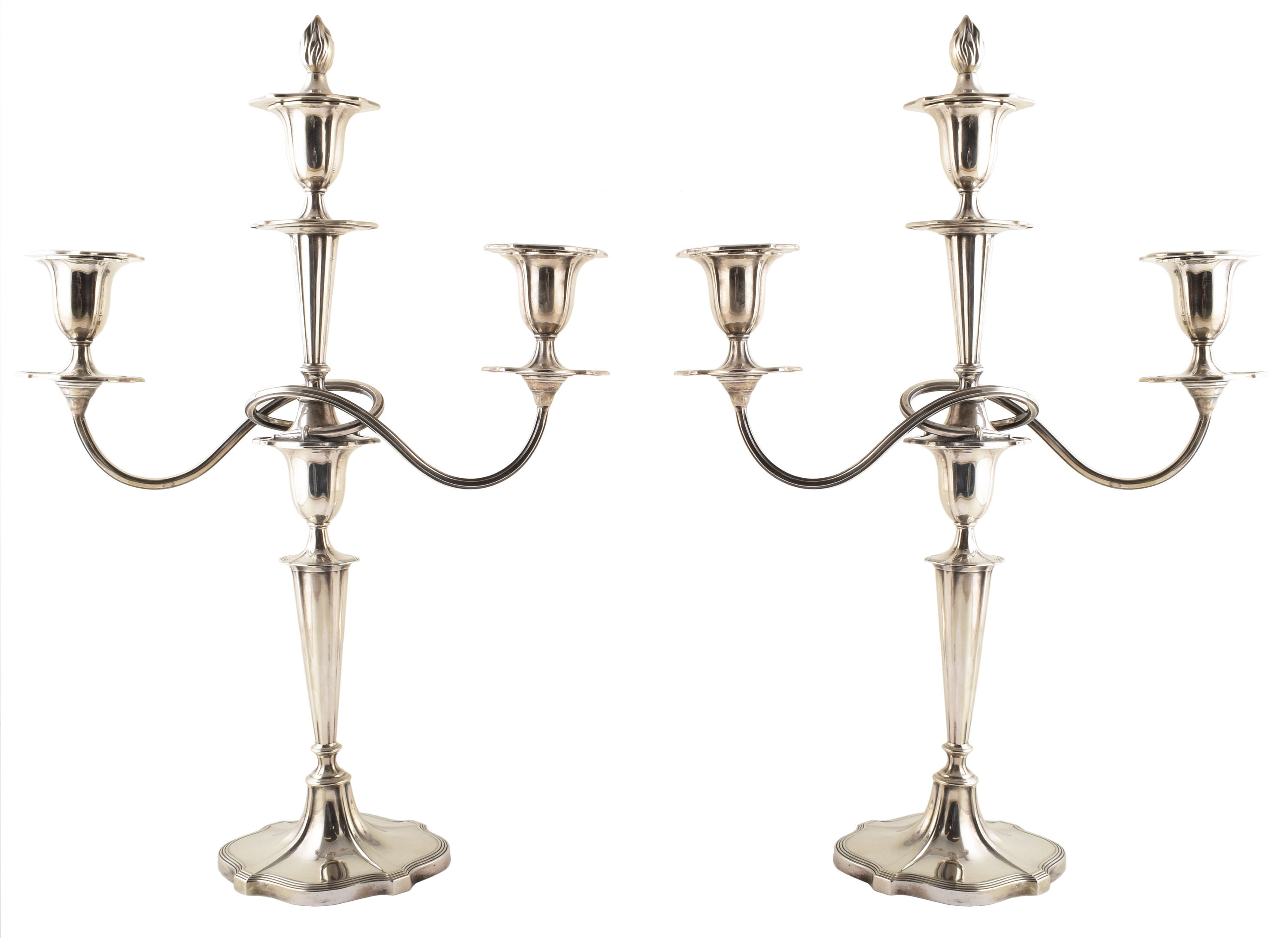 Wiener Werkstätte silver is in high demand at auction. With international collectors, silver produced as part of the Wiener Werkstätte movement achieves exceptional prices under the hammer. Wiener Werkstätte was established by the architect Josef Hoffmann, graphic designer Jutta Sika and patron Fritz Waerndorfer as a 'co-operative of artisans' in Vienna. With an emphasis on complete artistic freedom, Wiener Werkstätte drew inspiration from the Arts & Crafts, Art Nouveau, and folk art movements. Producing pieces from 1903 up until 1932 when the co-operative ran into fininancial hardship, the output from Wiener Werkstätte, be it silver, ceramics, jewellery, fashion, furniture or the graphic arts, is highly sought-after.

William Comyns is one of the most celebrated London silversmiths of the late 19th century. With typically fine late 19th and early 20th century pieces, Comyns pieces often include tortoiseshell, as well as beautiful Victorian and Art Nouveau styles. Comyns silver is recognisable through the maker’s mark of a W.C within a four tipped oval surround. 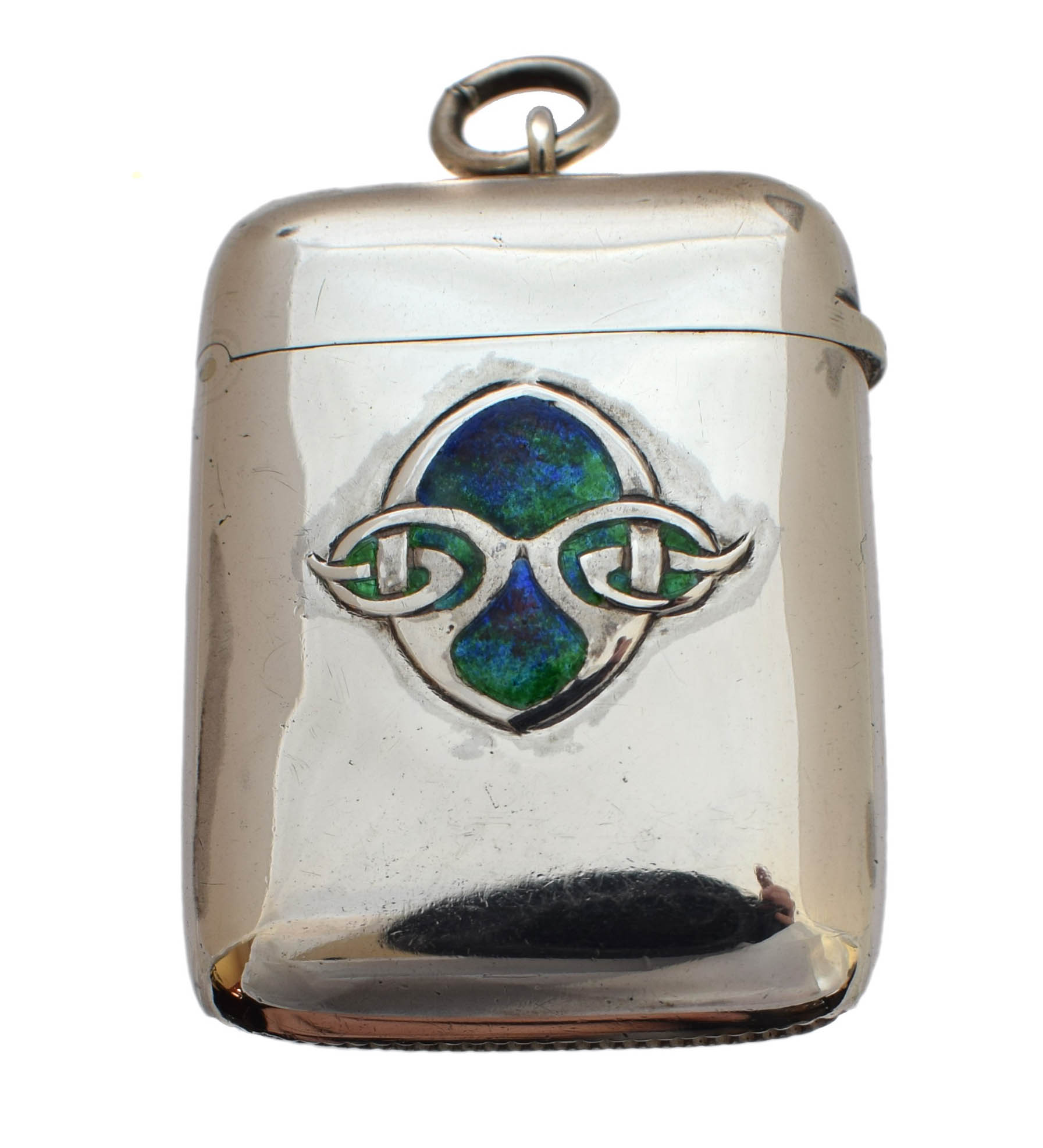 William Hair Haseler is a silversmith that is undoubtedly associated with Liberty & Co. W. H. Haseler & Co. was founded in 1870, producing gold, silver, and jewellery. In 1898, W.H.Haseler and Liberty went into partnership, with Haseler producing most of Liberty’s silverware from their Birmingham workshop. They launched the silver line of Liberty ‘Cymric’ and the pewter counterpart ‘Tudric’ under a new company name of Liberty & Co and produced works designed by Archibald Knox. 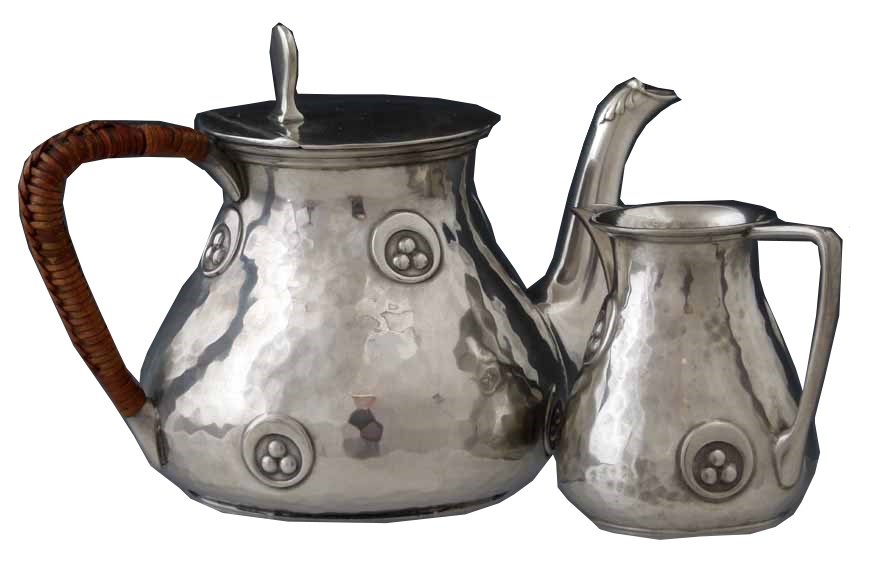