With a devoted following of collectors based around the North East of England, as well as scores of collectors who are attracted to the charm of the porcelain, Lowestoft porcelain always draws huge interest when sold at auction.

The Lowestoft porcelain factory was founded in 1757 by a group of local businessmen headed by Philip Walker. The factory followed many of Worcester’s patterns (going as far as placing the famous crescent mark on the bases of the wares), but developed very unique characteristics that separate it from the rest of the 18th century producers. The Lowestoft porcelain body is Phosphatic (meaning that animal bone ash is used as a replacement to Kaolin) being similar to that of Bow porcelain with its soft chalky white appearance except that Lowestoft has a translucency generally glowing light straw colour when held up to strong light. Due to the highly absorbent nature of the unfired porcelain body, Lowestoft wares with underglaze blue decoration needed to be painted and fired quickly or else the blue would run and in some extreme cases patterns become abstract.

The factory produced both polychrome wares and blue and white Worcester / Chinese inspired products. Unlike many of its competitors Lowestoft did not chase the London market and instead sold wares to the local area as well as enjoying keen trade with Holland. Souvenir wares titled ‘Trifle from Lowestoft’ were produced along with special commissions for local families often celebrating significant dates, which today are some of the most sought after pieces of 18th century porcelain.

No main Lowestoft mark was ever used and instead marks from rival factories sometimes adorn its wares. Lowestoft can be recognised by its chalky white body, straw yellow translucency but mostly its unique patterns which despite often following Worcester designs, stand out for the charming if not naïve quality necessitated by the need for speedy decoration. Other signs to look for are tiny marks on the rims of saucers and other wares where a piece would rest on metal prongs whilst being glazed. Lowestoft cream jugs typically can have small firing cracks at the spout join as the clay was often not plastic enough to fully withstand the forming process.

The factory survived until 1799 outliving many of its competitors and in its later years produced wares decorated in the Newhall style. The wares produced by the Lowestoft factory in the 18th century are some of the keenest sought after porcelain within the current collecting field.

On the right of this page you will see a few highlights of Lowestoft  items we've sold - to see more, including prices and dates, search our sold lot archives.

Below are a few highlights, or click here view all Lowestoft Pottery in our Sold Lots archive. 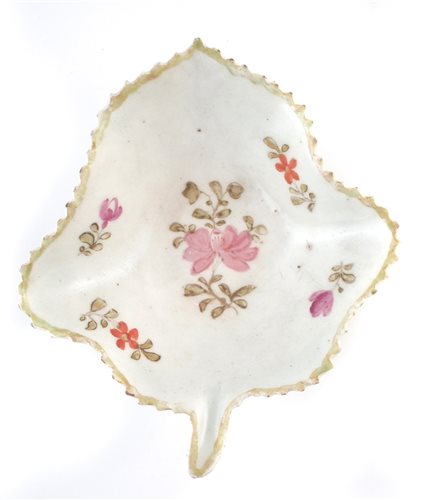