A family home in North London was the place a man, now living in Crewe was brought up in the 1950s with his brother. The two adopted children both pursuing careers went their separate ways leaving one brother who remained living in the family London house when his parents passed away.  During recent times he received few visits from other family members, and it became a shock when he passed away and the house was entered for the first time by the beneficiaries.  They discovered that the property was full of collectables. The core interest was bus and transport memorabilia (being offered for sale at Peter Wilson Auction Rooms on the 31st January 2019), also a vast collection of Royal Antediluvian Order of Buffalo’s (RAOB) medals. 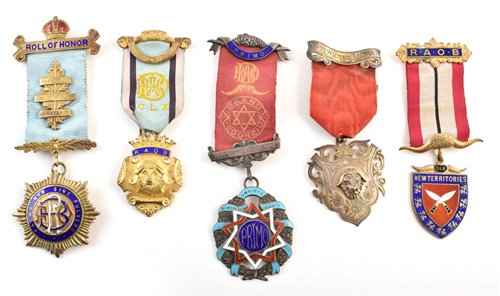 The RAOB was established in Dury Lane, London in 1822; it attracted artists, entertainers and stagehands and drew the name from a popular song of the time “We’ll Chase the Buffalo”.

ROAB suffered a loss of membership as a result of WWI with the male population fighting for the cause.  The Buffalo’s supplied ambulances and also purchased Grove House in Harrogate for use as an orphanage and later a military hospital.  Grove House now serves as a rest home, also offering rooms for short holidays.

Like many organisations of this kind, there has been a decline in membership; however, ROAB continues to work in local communities helping its members in times of difficulty or need.  Minor lodges throughout the United Kingdom and the rest of the world still raise money for charitable causes.

Peter Wilson Fine Art Auctioneers have been instructed to sell the collection of Buffalo memorabilia, some 1500 badges and medals, mostly gold and silver-gilt forming a fascinating collection which will be auctioned on 28th February, the sale will be available online fully illustrated three weeks prior to the auction.