The colloquially termed ‘Essex Crystal,’ or reverse carved intaglio is to many an intricate, fascinating, and eye-catching aspect of jewellery that never fails to put a smile on your face! Reverse carved intaglios emerged around 1860, in the ‘High’ Victorian Era, a time of increased prosperity and subsequently demand for jewels. Peter Hinks in Nineteenth Century Jewellery observes that “a new adventurousness in the treatment of gems” was very much present in the 1860s and 70s, with reverse carved intaglios one of the most adventurous!

Reverse carved intaglios are created through a meticulous process. Using steel tools, the artisan carves deeply into the back of a rock crystal cabochon in reverse. The carving is then painted, sometimes with brushes only a single hairs width and typically sealed with a mother of pearl backing. As a result, the image appears floating within the cabochon when viewed from the front.

Belgian artist Emile Marius Pradier is largely credited with introducing the technique with his pieces that are amongst the only reverse carved intaglios to be signed. However, in England it was Thomas Cooke who really developed the art of the reverse carved intaglio, creating pieces that were retailed by Lambert & Co. of London. Of course, other artisans followed and many pieces on the market today vary widely in composition, depth of carving and fineness of the work, which is particularly visible when these pieces are viewed obliquely. 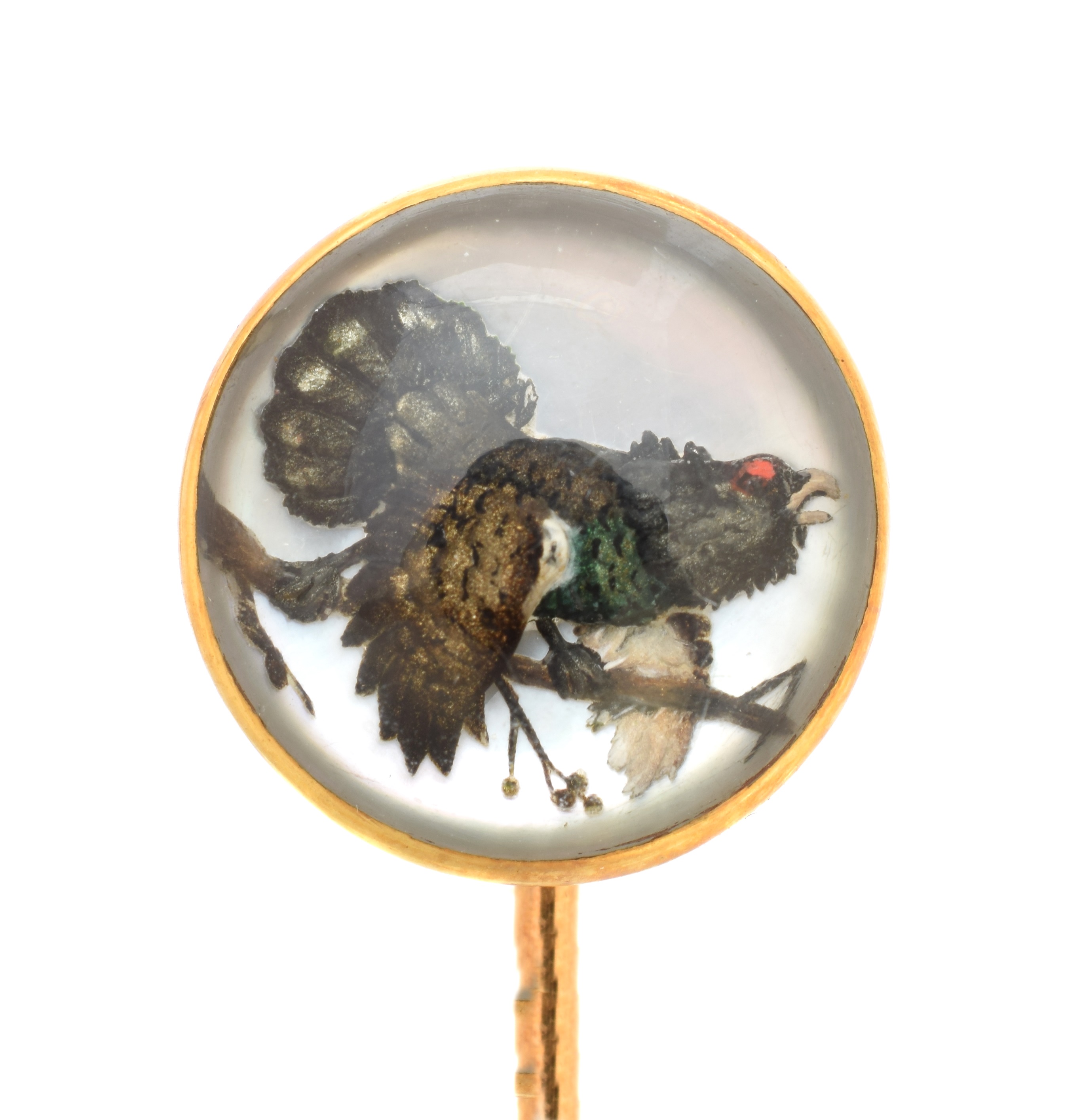 This piece by Austrian jeweller Ernst Paltscho, best known for his colourful Deco jardiniere brooches shows the prevalence of the reverse carved intaglio through Europe by the early 20th century. Depicting a capercaillie, the heaviest member of the grouse family, this is a typical sporting motif seen in stick pins of the time.

Pieces of reverse carved intaglio jewellery were wildly fashionable, with items for both ladies and gentlemen produced. For the gents, buttons, tiepins, cufflinks and stick pins were created, as well as brooches, pendants and earrings for the ladies. Popular subjects included horses, both in hunting and racing scenes, dogs, flowers, game birds and monograms, although rare and sought-after unusual subjects include cats, exotic animals and even penguins that have soared at auction!

A typical subject of the reverse carved intaglio, this pleasant and natural scene of a stork in bullrushes is framed by a wonderful oval shape surround, decorated with cannetille decoration. A typical surround for high Victorian jewellery, the cannetille and wirework decoration draws inspiration from Ancient Greek jewels.

What’s in a Name - Reverse Carved Intaglio or Essex Crystal?

The moniker ‘Essex Crystal’ comes from celebrated English enamel painter William Exssex (1784-1869). This widely used term is somewhat misleading, as William Essex himself had no connection to reverse carved intaglios. Essex was appointed Royal enameller to Queen Victoria in 1839, with his work based on copies of Old Master compositions, as well as striking compositions in miniature. It is this skill in miniature that accounts for the misnomer, with the terms widely used interchangeably today in the trade and in literature. 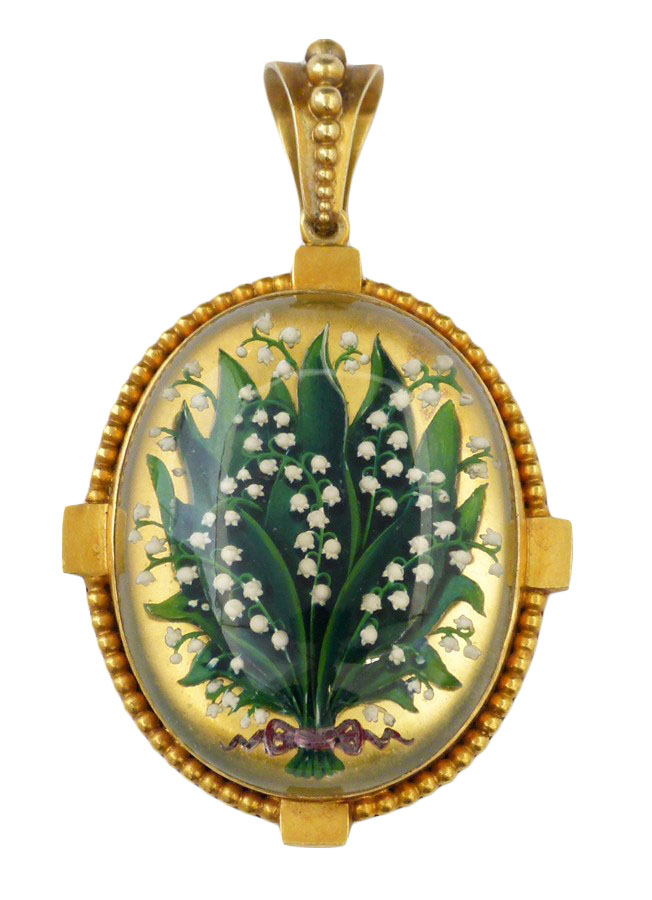 A late Victorian Essex Crystal locket, depicting a lily of the valley with red ribbon accent. Sold for £2,013.

This wonderful reverse carved intaglio pendant reflects the Victorian trend for Floriography, representing sentimental and hidden messages through the choice of flower. The lily of the valley in this intaglio was said to represent 'a return to happiness.' We sold a pair of accompanying earrings to this locket for £1,830. 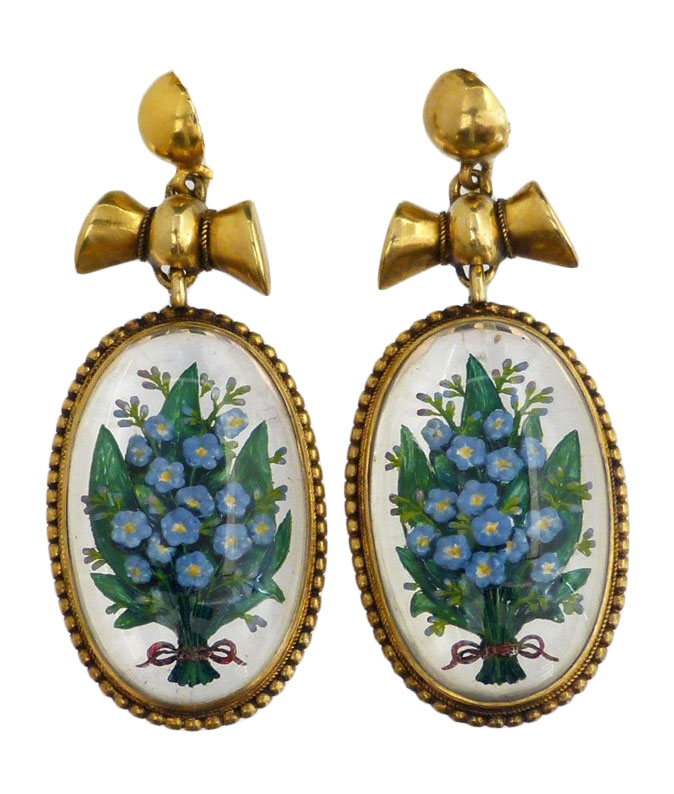 These late Victorian reverse carved intaglio earrings feature striking 'spool' or 'bobbin' surmounts, these were highly typical of 1860s earrings during which the wearing of earrings was a much celebrated fashion, with hairstyles of the day allowing for ladies earlobes to be exposed. The floriography here is typically sentimental of the time, with forget-me-nots hugely popular in turquoise, diamond and enamel set pieces also, signifying rememberance and eternal love.

A typical set of early 20th century equestrian reverse carved intaglios, depcting polo, racing and hunting. These intaglios are amongst the most commonly seen at auction, with an enduring appeal and a large collectors base that ensure great hammer prices.

However, in modern times it has enjoyed a slight revival, largely thanks to LA-based celebrity jeweller Irene Neuwirth. Neuwirth sets custom and hand-painted intaglios of her clients pets into fine jewellery, with one of her most famous commissions of worn by Jennifer Aniston in 2019. 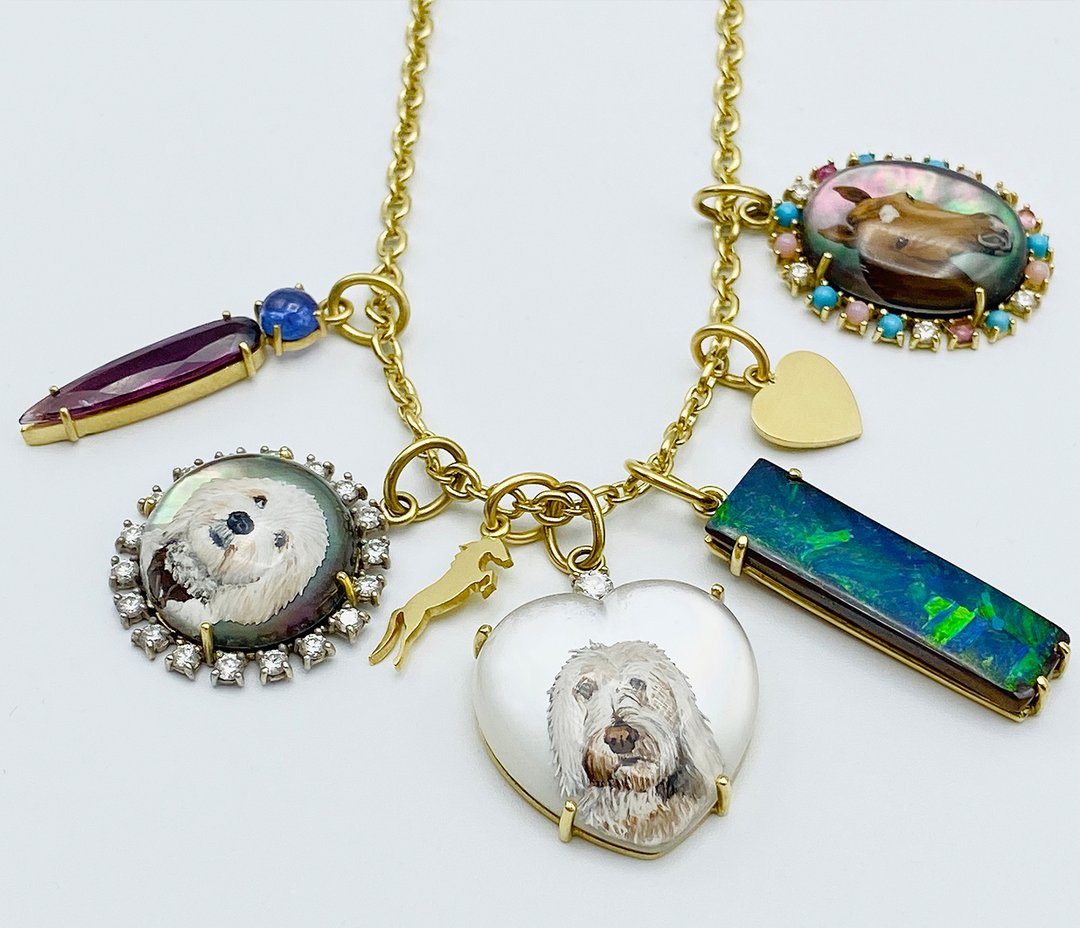 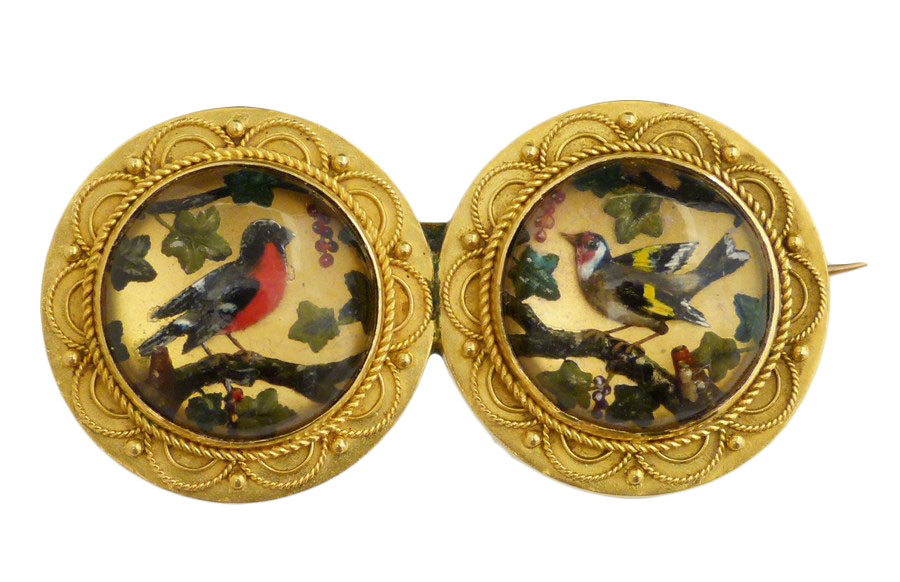 A late Victorian Essex Crystal brooch, depicting a bullfinch and a goldfinch. Sold for £732.

Jovial, colourful and entirely unique, reverse carved intaglio jewellery sells very well in our Fine Jewellery auctions, with top prices going for unusual subjects, great condition and quality settings, even better if it is accompanied in its original fitted case! If you have a piece you would like to sell, find out more about, or to get a provisional valuation, do get in touch with us.

Would you like to find out how much your jewellery collection could be worth at auction? Contact us for a free, confidential and up-to-date auction valuation. We hold four Fine Jewellery & Watches sales a year, featuring a wide range of both antique and modern jewellery. Get in touch with our specialist team for further information about our Specialist Sales calendar.

For further information about our Fine Jewellery & Watch Auctions, or to gain a free auction valuation of your own collection, contact our specialist via liz.bailey@wilson55.com. 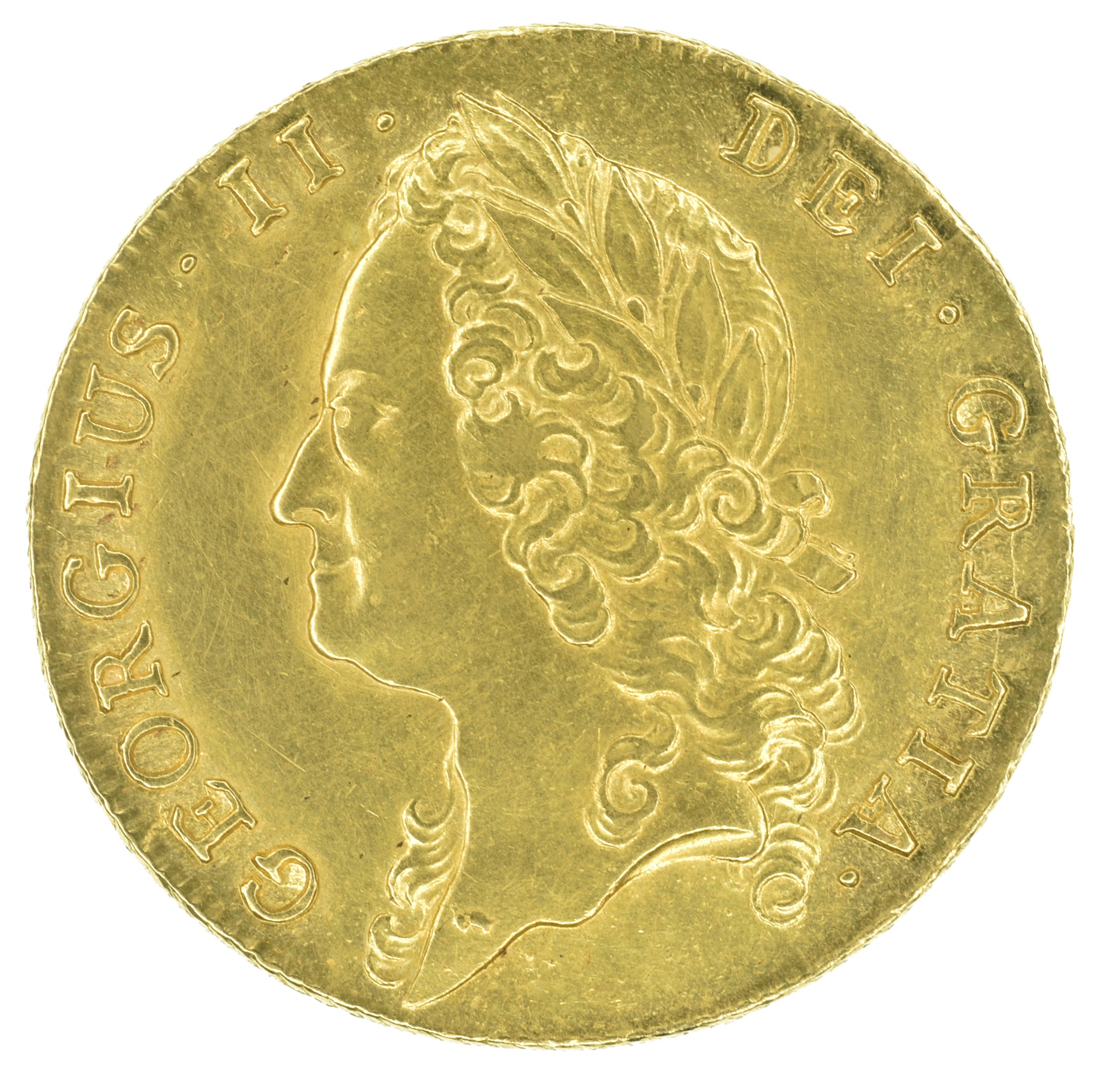