Detecting an expert copy of a Flintlock Sea Service Pistol

Are these genuine sea service flintlock pistols or are they pirate products of the 20th century?

Fakes and forgeries are inherent with any object of value and as part of the job of a valuer, they are frequently encountered. Sometimes a forgery is so well made it stops you in your tracks and gets you scratching your head. These two certainly did. Luckily we had access to an original example in a good local private collection (illustrated below) to compare them with. This is how we determined the true nature of these sea service pistols.

Looking at the details.

Whoever put these copies together certainly knew their stuff and the attention to detail is quite remarkable. The devil however is in the details and very close examination gives them away.

The copies have the correct lock markings, but something is just not right about them. Look at the crown and GR, in comparison to the original.

Next compare the font that ‘Tower’ is stamped with.  A top firearms expert once told me that it is the font used in a stamp that gives a forgery away. Nothing is truer than in this case.

Look at the border engraving lines around the lock. On the copies this is shaky and not a neat double line as in the original. Also notice how there is a line on the lock plate which runs around the hammer when set to half cock, this has not been properly executed on the copy.

Brass is a good giveaway. Look at all the marks from use the original has had and then notice the lack of any signs of use on the copies, if these guns had been fired and carried as often as other areas of ageing suggest there would be a lot more wear to see.

Screws and bolts are a good clue. The bolts that hold the lock in the stock (side nails as they are known) are not nearly as substantial as they should be. Standardisation didn’t become common within ordnance made guns until the advent of the percussion Enfield rifles but why is it that the bolts on the copies use completely different (and more modern) threads when compared to the sizes of the original? It is interesting to note that the screws of the original will not even fit through the corresponding holes on the copies.

Also, notice how lightly impressed the marks are on the copies. They have not been stamped to the same depth and with the same vigour that a true ordnance worker who had hundreds of guns to get through would have used.

You will find assemblers marks on original ordnance guns. Workers assembled and worked on several guns at once and prior to serial numbers being stamped on guns they used little Roman numerals on each part to make sure they all went back together on the correct gun. Remember that this is before standardisation came into the production of ordnance guns and each one was hand fitted. If you look at the details below of the original it was gun number two on an assembler's workbench and every bolt and component has an ‘II’ marked onto it. These assembler's marks are absent on each of the copies.

Look at the carving of the ramrod recess underneath the guns. On the copies, this is far too wide and flared. Also notice the difference of the ramrod pipes between the two. It is important to note that the original gun has an expertly made replacement ramrod. 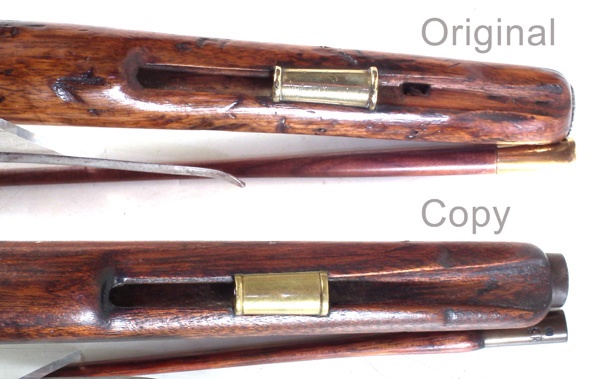 Perhaps the biggest giveaway of all and the biggest mistake in the copies is the wood. The copies are made from mahogany and not walnut as they should be. Upon handling these guns the carving of the stocks has as full and confident as the stock of the original whose maker probably made many hundreds of stocks throughout their career.

Gut feeling is always the greatest asset when assessing an antique. If it doesn’t feel right straight away then there is probably something wrong with it. It is always worth trusting your first impressions when looking at a potential purchase as these are often the most reliable. When these sea service pistols arrived at the saleroom they immediately felt wrong despite every detail being in the correct place.

Should you have any items you would like to consign to one of our Arms and Military auctions we would be pleased to hear from you. Please contact Chris Large chris@peterwilson.co.uk or call 01270 623878