From the Rover's Return to the Russian Jewellers

The Fabergé egg from Coronation Street...

Jack and Vera would have loved it. Included in our September 2017 Fine Art auction is a modern-day Fabergé egg which comes for sale from the family of the actor Bill Tarmey (1941-2012). It is expected to sell for around £6,000.

The names of Fabergé, jeweller to the doomed Russian royal family, and Jack Duckworth, pigeon fancier and lover of bluestone cladding, are not natural bedfellows.

However, Bill Tarmey, who played the much-loved character for 31 years, bought this 18ct yellow gold and royal blue guilloche enamel egg as a treasure to admire in his own Greater Manchester home. Made in an edition of 100 (it is stamped 51/100), it dates from the period 1989-2009 when German jewellery house Victor Mayer held the licence to use the Fabergé name. It is in excellent condition and comes in its original leather presentation box.

The tradition of the Tsar giving a jewelled egg at Easter - the most important festival in the Russian religious calendar - began in 1885. Eight of the 50 Imperial eggs made by Peter Carl Fabergé for Alexander III and later Nicholas II were missing until 2014 when the Third Imperial Easter Egg of 1887 resurfaced in the US.

However, since it was nationalised by the Bolsheviks in 1918, the Fabergé name has been sold and resold many times. Faberge eggs made by Victor Mayer of Pforzheim, Germany in the 1990s were shown alongside original works at the Metropolitan Museum, New York in 1996 and formed part of the exhibition Faberge. A Return To Russia staged at the Kremlin Armoury in Moscow in 2001.

Please visit our Jewellery department page or contact our department specialist Liz Bailey if you have a similar item you'd like to consign to our sales. 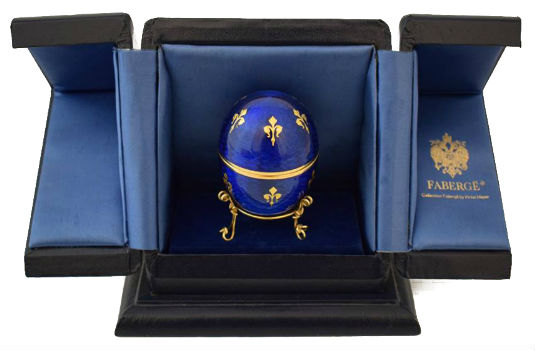