Letters from Nelson's Captains to be sold in February 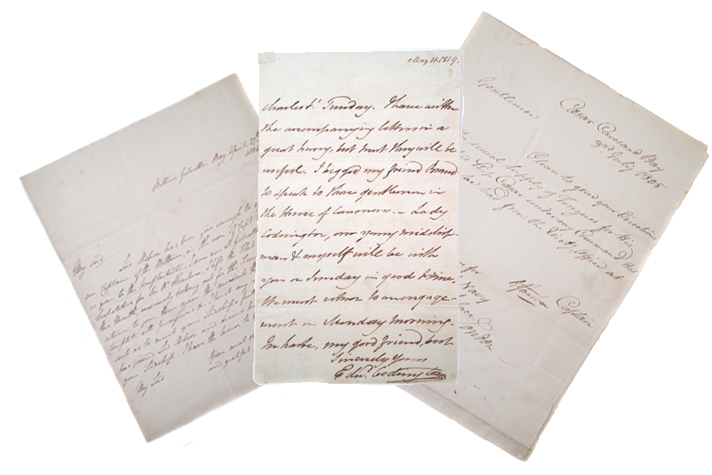 Collectors of memorabilia related to Britain’s greatest naval hero, Admiral Lord Nelson, will be setting a course for our Fine Art sale on Thursday 15th February.

On offer will be a rare group of autograph letters from Nelson’s fellow captains, all written between 1804, the year before the historic Battle of Trafalgar and 1819. By then Nelson had been memorialised by Lord Byron, whose poem ‘Don Juan’ described him as ‘Britannia's god of war' and monuments to his memory were being constructed around the country.  One letter, in handsome copperplate writing, from Admiral Sir Robert Calder (1745 -1818) dated January 2nd 1813, to Mr Philip Miller instructs Miller to 'act as Master of the Pyrenees until further hour'. Calder commanded a fleet of 15 vessels and engaged a larger combined fleet of 20 French and Spanish ships on 22nd July 1805 at the Battle of Cape Finisterre capturing two Spanish ships before fog and nightfall caused his withdrawal. Much indignation at his failure to re-engage with the enemy was felt in England, resulting in his court-martial on 23 December 1805. The letter is estimated at £150-250.

A letter from Admiral Sir Richard King (1774 -1834) dated 25th February 1809 from H.M.S. Achille, to Admiral Duckworth reports the findings of a survey ordered by Lord Gambier 'on the remains of necessaries supplied for the use of the sick and wounded' and also includes a copy of the surgeon's report listing supplies needed. King was Captain of H.M.S Achilles at the Battle of Trafalgar. The letter was written from the Achilles off the west coast of France or Spain. The surgeon's calls for tea, sago, rice, pearl barley, soap, soft sugar and 36 gallons of lemon juice, the latter rich in vitamin C and important in fighting off scurvy. The single-page letter, together with a copy of the surgeon's report, are estimated at £200-300. 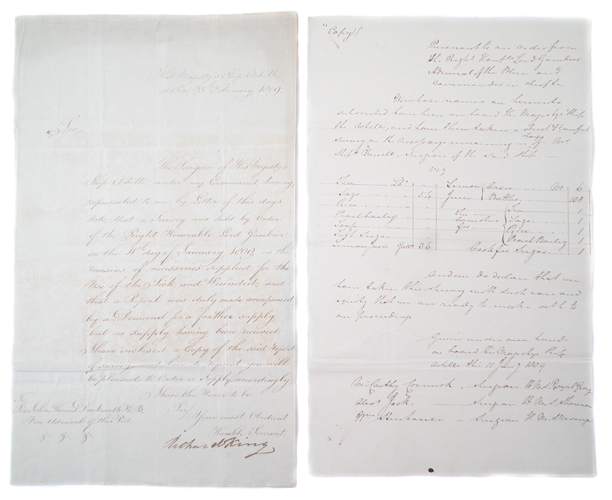 A letter from Sir Henry William Bayntun (1766-1840) dated 22nd July 1804, certifies ‘the principal officers and commissioners of His Majesties Navy that no stores were lent or bought' during the time he commanded the Leviathan from 22nd July 1803 to 22nd July 1804’. The letter also mentions that ‘shrouds and backstays were not shifted or topmasts lost in the said time’. The letter mentions Will Rudgley and Alex Mowbra,y who acted as Boatswain and Thomas Chris Speck and James Avory carpenters. Bayntun commanded H.M. Leviathan as part of Nelson's fleet at Trafalgar and for his part in the battle he was awarded the Gold Trafalgar medal and Sword of Honour.  The single sheet is estimated at £100-150. A letter from Sir John Louis (1785-1863) dated 27th April 1805, to Henry Dundas 1st Lord of the Admiralty reports that 'Lord Nelson has been good enough to appoint me Captain of the Bittern... ‘I am now at Gibraltar with Dispatches for Sir Rd Stachan'… 'I left fleet on the 6th... anxiously looking for the French Fleet'

Louis served under his father, Thomas Louis, captain of the Minotaur, and was made commander on 28th February 1805 and Captain 22nd January 1806. He was later Superintendent of Malta Dockyard 1838-1843 and Admiral Superintendent at Plymouth 1846 - 1850. The single sheet folded letter is estimated at £100-150. Admiral Sir Richard Strachan (1760 -1828) is represented by a letter dated 3rd July 1805, to the commissioners for His Majesty's Navy Somerset Place ordering 'The usual supply of Tongues for His Majesty's Ship Caesar under my command'.

On 4th November 1805 at Cape Ortegal, Strachan famously captured four French battleships with little loss to British life after they had escaped from Nelson’s fleet at Trafalgar. The unfolded single sheet letter is estimated at £100-200. Others are from Admiral Sir Edward Codrington (1170-1851) who commanded H.M.S. Orion at Trafalgar, which forced the surrender of the French ship Swiftsure and took part in the action in which the Intrepide was captured (estimate £80-120); Captain W. Brown (1777-1857) who commanded the Ajax at the Battle of Cape Finisterre (£100-200); and Vice-Admiral Sir Henry Blackwood who commanded the Frigate Euryalus at Trafalgar (£200-300). A portrait of Nelson by Glossop artist Ronald Fountain, together with a metal bust of Nelson; a Royal Doulton stoneware jug commemorating him and his captains; an unusual pearlware jug, circa 1805, finely painted rather than printed with a detailed plan of the Battle of Trafalgar, a portrait of Nelson and a full list of the ships involved at the battle and another dating from 1800-1815 relating to the Bonaparte Peninsular war/Waterloo printed with a cartoon depicting Napoleon Bonaparte hanging from gallows whilst a figure sets light to powder kegs beneath him are also likely to draw strong bids from collectors. 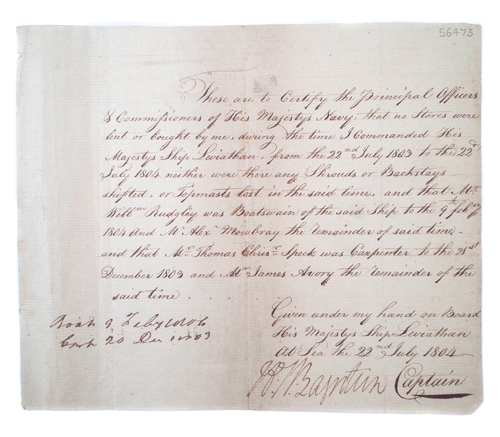