Hofner guitars are some of the most frequently seen collectable vintage guitars in the British auction market today. This prolific stringed instrument manufacturer had the right products available at the right time to harness the mass interest in guitars during the music revolution of the 1950's and 1960's.

The company, founded in 1887, sees its routes in Schoenbach Germany where Karl Hofner established a rapidly expanding family business. The company originally manufactured violins and other string instruments, guitars not being a consideration until the 1920's when the company took note of the rising popularity of the six-string. A line of guitars was to join Hofner's production in 1925 by which time the company was the largest instrument maker in the area. During WWII Hofner turned to making wood crates and boot soles for the war effort and post-war was forced out of the area as the geography of Germany was redeveloped. Hofner's new home ended up in Bubenreuth West Germany and saw the company continue with full pre-war gusto where two factories were engaged in producing music instruments for the Hofner line.
The Rock and Roll boom of the 1950s was to prove hugely successful for Hofner. In the UK a ban on American imports from 1951-1959 meant that there was a great shortage of guitars, especially those with electric pickups. The Selmer Musical Instrument company saw the opportunity and became distributors of the Hofner guitar line which was eagerly embraced by British guitarists wanting to emulate America Rock and Roll music.
Hofner had an impressive range of options designated by model numbers for their archtop guitars but Selmer re-branded these with appealing sounding names such as the Club, Senator, President and Golden. Hofner's products were to gain popularity with some of the big names of guitar playing in Britain including Tommy Steele and Bert Weedon, a guitar tutor guide book by Weedon 'Play in a Day' which was hugely distributed in the '50s and '60s featured an illustration of Bert brandishing a Hofner Committee on the front cover. Most importantly Hofner's range included budget instruments as well as the more lavishly appointed guitars, these lesser priced guitars allowed budding musicians to get playing and are seen in the hands of John Lennon and George Harrison during the early days of the Beatles. It was Paul McCarthy's prolific use of the Hofner 400 bass guitar (better known as the Violin Bass due to its small size violin-shaped body) which was to be one of the greatest advertisements a guitar manufacturer could wish for.
The 1960s saw Hofner adding solid body guitars with a distinctly Fender flavour to its production line as well as making thin line archtop guitars named 'Verithin' which aped the popular Gibson ES335. Hofner was to battle on through the 1970s and 1980s and survived the huge competition of Japanese and other far east imports which hurt pretty much all western guitar manufacturers. In 1994 the company became part of Boosey and Hawks but since 2004 has reverted to private ownership and is run by former factory general manager Klaus Scholler and his wife Ulrike Schrimpff who maintain a traditional line of guitars in production from Hofner's golden era.

Originality and condition are of great importance when assessing the value of a Hofner guitar. Hofner was principally a manufacturer of instruments from the violin family and employed many traditional practices when producing guitars. These construction methods were not necessarily as robust as needed for steel string guitars and the rigours of life in a rock and roll band for which they would be employed. Because of this, it is frequent to see Hofner guitars with working repairs, missing parts and non-original replacements. Hofner was also quite late in re-enforcing the necks of the guitars with steel truss rods to resist the huge strain of steel strings,  consequently many guitars are often encountered with warped necks making them almost unplayable.
At Peter Wilson auctioneers Ltd we are experienced in handling both vintage and modern guitars. If you have an instrument you are interested in selling with us why not fill out the valuation form and get an estimate. 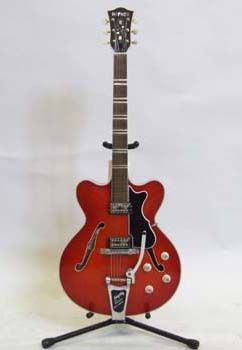