Intaglio jewellery features carved gemstones that have been carved below the surface to reveal an image. One of the oldest forms of jewellery, intaglio pieces have been found from around 5000BC. With varying functions over history, intaglios have been used as seals (revealing their image when stamped onto hot wax), amulets (as symbols of personal protection) as well as decorative objects.

Sold in 2017 was a remarkable piece of intaglio jewellery, set with twenty-seven ancient intaglios, arranged beautifully in a necklace. These intaglios would have originally been worn in rings, and had been assembled by a late 19th century collector into this fantastic piece, carefully arranged into a graduated necklace, with the intaglios securely set in rubover settings.

Significantly, all of the twenty-seven intaglios were authenticated as 1st century Roman. It is likely that the intaglios were purchased in Italy, and it appears that they were specifically selected to portray depictions of animals and plants. Wilson 55 would like to thank Dr Martin Henig of the Institute of Archaeology, Oxford, for his help in identifying the intaglios.

1 - Amethyst carved with a bird on branch and a star

2 - Carnelian carved with a lion

3 - Green chrome chalcedony carved with a palm with two cornucopiae

4 - Banded agate carved with a cow, dating to the second half of 1st century BCE, Augustan

5 - Carnelian carved with a cow

6 - Amethyst carved with a cow

7 - Carnelian carved with a pair of cows within a border

8 - Carnelian carved with a cow beneath a tree

9 - Banded agate carved with a palm, a horn of plenty and a globe, dating to the second half of 1st century BCE, Augustan

10 - Carnelian carved with a dolphin and a palm of victory

12 - Carnelian carved with a charioteer with large 2 horse chariot (biga), initialled AV (presumably part of the name of the owner)

13 - Sardonyx truncated cone carved with a bird perched on globe; the bird is pecking from a cornucopia

14 - Carnelian carved with a sphinx

15 - Amethyst carved with a satyr, part of the entourage of Dionysus

17 - Carnelian carved with two horses, one with rider

18 - Banded agate carved with a boar, dating to the second half of 1st century BCE, Augustan

19 - Carnelian carved with a lion

20 - Sard carved with Pegasus or a lion griffin

21 - Carnelian carved with a hand holding corn and poppy head

22 - Blue onyx carved with a dolphin

23 - Carnelian carved with a goat nibbling on ear of corn

24 - Carnelian carved with a cow beneath a tree

25 - Carnelian carved with a hound chasing a hare

Roman intaglios are a fascinating subject within the canon of intaglio carving. Blending an influence of the Greek and Hellenistic intaglios with their own unique motifs and techniques, the Roman intaglios feature a huge variety of symbolism. Interestingly, in the earlier years of the Roman empire, opaque stones such as agate, sardonyx, carnelian, chalcedony and paste were used. However, moving into the later years, translucent and event transparent gems were more frequently used, examples include garnets, aquamarine, peridot, topaz, amethyst, emerald and sapphire. Our necklace features a variety of gemstones, mainly opaque examples with a couple of carved amethysts featured in intaglios 1, 6 and 15. A 'nicolo' example is seen in intaglio 22, a term used for a black and blue layered agate that was carved to reveal the image and border in black with a grey/blue background.

Several of these intaglios depict animal carvings, designed possibly as amulets serving to bestow the wearer with the symbolic and associated qualities of the subject.

Lions - Seen as symbols of power, strength, and public duty in the Roman times. This is seen in intaglios 2, 19, and 20.

Cows - Cows were associated with harvest, and so used to bestow wealth and prosperity on the wearer. An unsurprisingly popular subject for an amulet, cow carvings are seen in intaglios 4, 5, 6, 7, 8, and 24.

Goats - Symbolic of victory. Intaglios 23, 26, and 27 all depict goats with ears of corn, meaning to represent prosperity in victory. 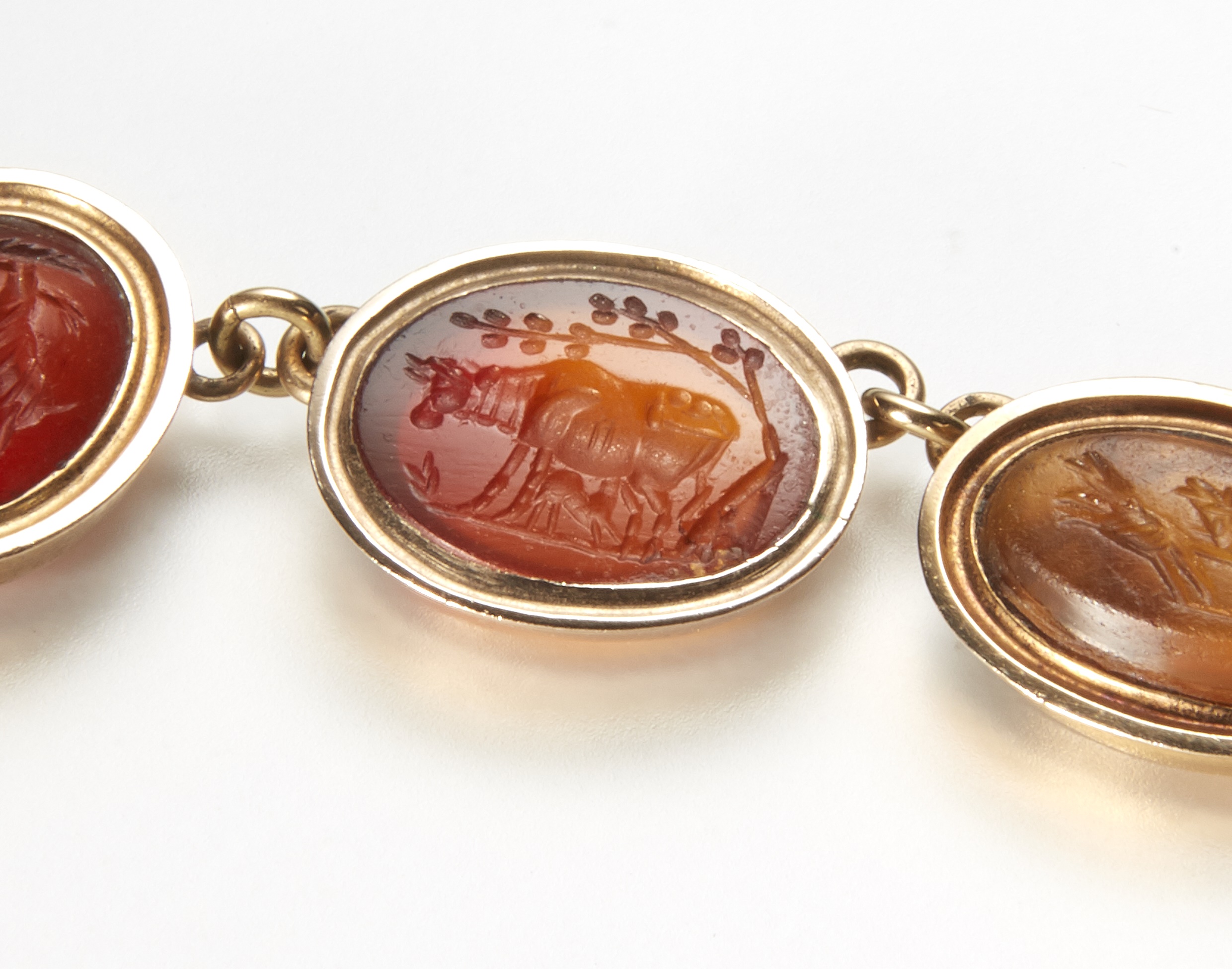 Above: Intaglio 24 - Carnelian carved with a cow beneath a tree.

Distinctly 'Roman' motifs in intaglios include those associated with victory, heroes, warriors and emperors. These intaglios are seen throughout the necklace. The symbolism in intaglios 9 and 13, of a palm, horn of plenty and a globe represented world rule. Intaglio 12 depicts a heroic scene, detailing a charioteer with two horses.

The palm was such a powerful symbol in Roman culture that the Latin word 'palma' became a metonym for victory. Palms are seen in intaglios 3, 9, and 10, indicative of the widespread prevalance of this association.

Finally, intaglio 14 shows a sphinx. The sphinx was the emblem adopted by Emperor Augustus for his first imperial seal. 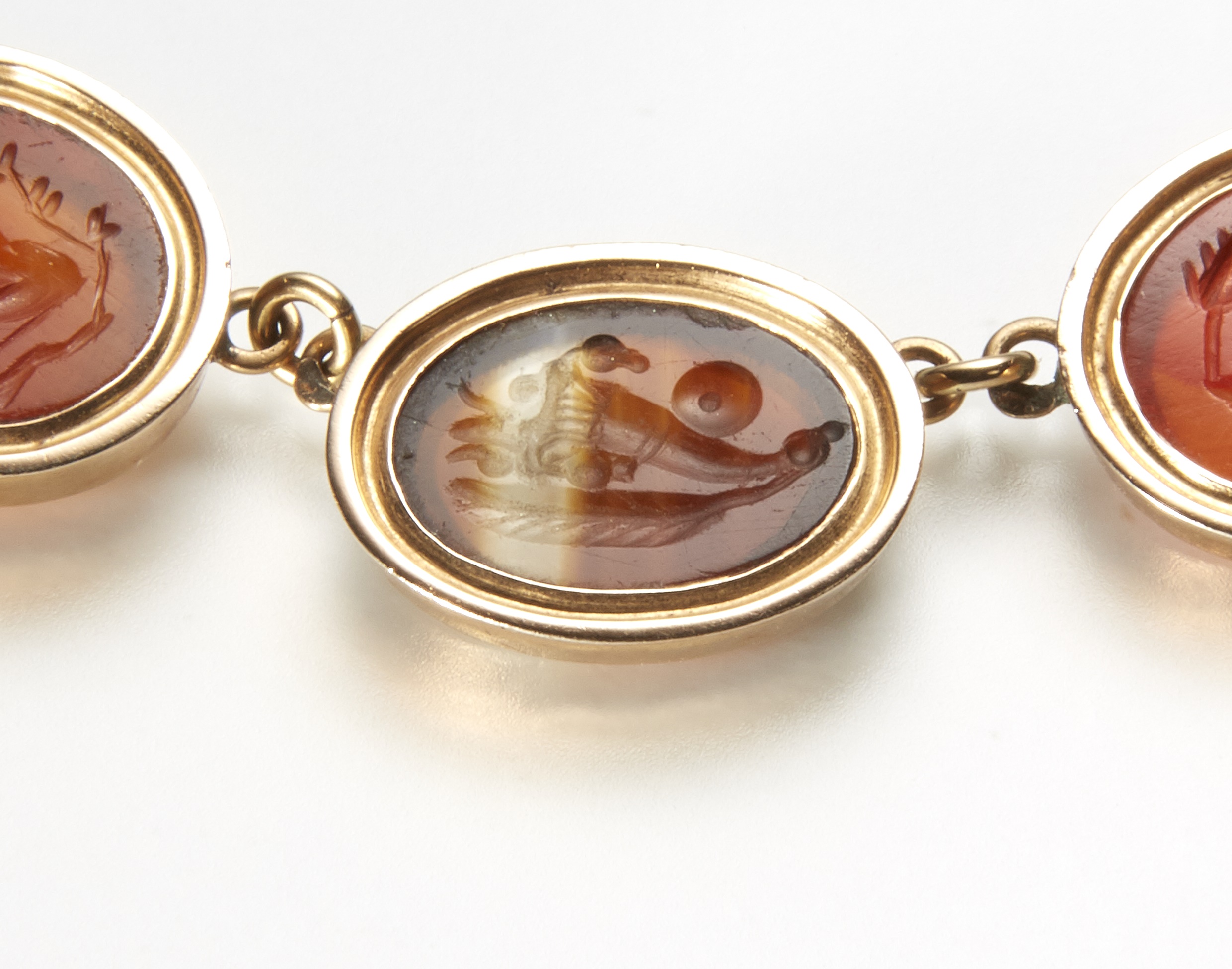 Above: Intaglio 9 - Banded agate carved with a palm, a horn of plenty and a globe.

Whilst the Romans bought their own symbolism to the craft of intaglio carving, they also relied and reused popular motifs from Greek and Etruscan culture. This necklace features a beautiful mix of intaglios, with some distinctly Greek symbols reimagined by the Romans.

Intaglio 11 features Dioscuri, the two heavenly twins of Greek mythology with their horses, whilst in intaglios 14, 16 and 20 the Greek mythological characters Cupid, the Sphinx and Pegasus are represented. Meanwhile, intaglio 15 features a satyr carved into amethyst. Interestingly, the satyr was a companion of the Greek God of wine, Dionysus. The choice of gemstone here is also telling, as Pliny the Elder famously declared that amethyst 'prevented drunkenness,' so in this carving we see a perfect symmetry between the stone and its subject. 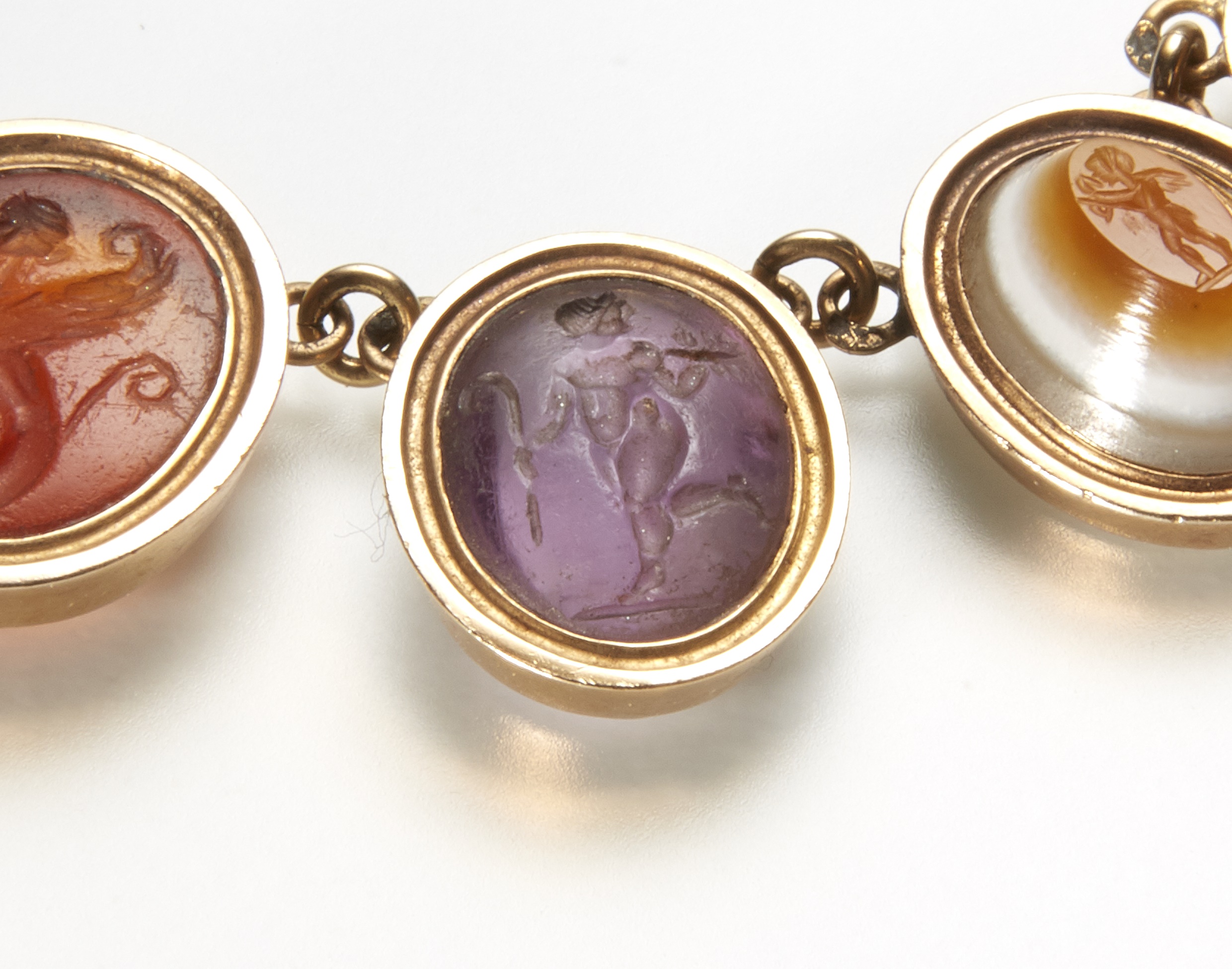 Above: Intaglio 15 - Amethyst carved with a satyr, part of the entourage of Dionysus.

Pieces of ancient intaglio jewellery very rarely come to auction, and so prices for this type of jewellery can be exceptional. With a worldwide collectors base, intaglio jewellery is in high demand. Our necklace reached £34,160 under the hammer after serious interest from collectors all over the globe. If you would like further information on your jewellery collection, or are curious about how much your collection could fetch at auction, contact us for a free, confidential and obligation free appraisal.

To get a free auction valuation on your jewellery, fill in our free online form, or book an appointment with us.

With thanks to Lola Rafieva PhD FGA DGA AJP