Our 25th November sale features several muskets from a good private collection we are pleased to been instructed to dispose of during our 2021 sales calendar. Of these, three Brown Bess muskets are worthy of further study for they all have an Irish connection. We know this because of the Irish registration marks which have been applied to each gun on the butt plate tang and the barrel just ahead of the proof marks. The Registration of Firearms (Ireland) Act of 22nd August 1843 ran for only three years and was an attempt to cut down on private ownership of firearms and monitor those in circulation. Each gun was numbered with two letters preceding this number establishing where the gun had been licenced. In the image below you can see our three muskets were registered in Londonderry (L-Y) and Antrim (A-N) 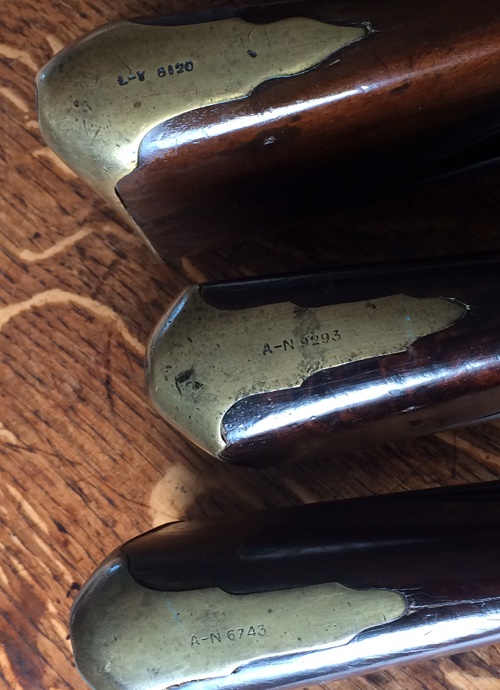 The rarest and most interesting of the trio is the 42 inch short land pattern musket registered in Londonderry. This flintlock musket was originally produced in Dublin Castle rather than being a London Tower produced Brown Bess as most frequently found. Beginning in the 17th Century Ireland had its own board of ordinance separate from the British equivalent tasked with maintaining and repairing weapons of the British troops stationed there. During the Brown Bess era of the 18th century the Irish board of ordinance began producing complete arms made at Dublin Castle. One characteristic of the Irish muskets is the quality of the engraving. The border line engraving, wording ‘Dublin Castle’ and the Crown and GR mark are cut a lot cruder than an equivalent British example. Short Land pattern muskets are becoming rare on today’s market, being a Dublin Castle example will make it very desirable and despite its condition from a hard working life the Short Land is expected to sell for £1,500- 2,500. 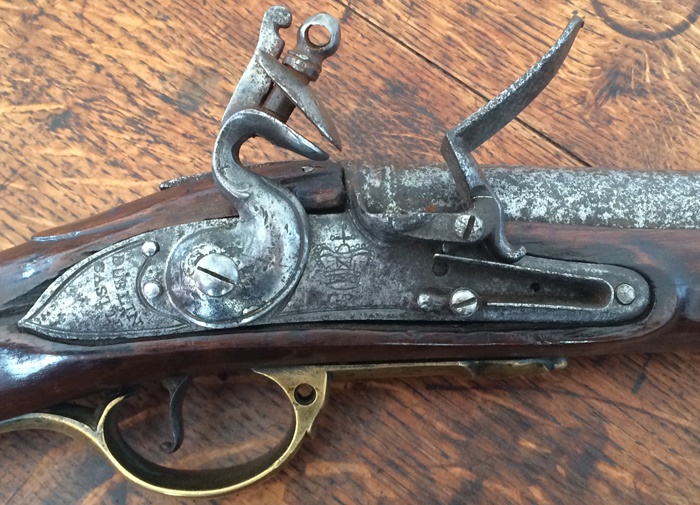 The two Antrim registered muskets are British-produced tower examples. They are of the so-called India pattern and are the most frequently seen of all Brown Bess muskets in today's market. One has a ring-necked hammer a design feature intended to stop this working part from snapping after repeated use. It carries the engraved marks 2:Rn:96 to the barrel which stands for the 96th Regiment of Foot (later known as the Manchester Regiment) This regiment was disbanded in 1818 at Limerick following garrison duties in Ireland which is perhaps when the musket fell into private ownership. The second India pattern is the later variant when the design of the hammer reverted to the swan neck most frequently seen on Brown Bess muskets. These two are each expected to sell for £1,500 – 2,000 in our November sale.

10am – 4pm on Monday 22nd, Tuesday 23rd, Wednesday 24th November. We would ask people interested in viewing this sale in person to still book an appointment and bring ID with them when visiting the saleroom.