Some firearms are exceptionally impressive and in the competition of whose gun is the biggest, the Wall gun included in our 27th May sale is the clear winner!

Jo and the flintlock wall gun.

These goliaths of firearms were built to bridge the gap between the standard military muskets and artillery. Although it has a stock it is designed to be mounted to a rampart or wall by a steel yoke hence the name 'wall gun'. There is occasional mention of these beasts being used on ships although this is rare and shorter versions were more commonly used, termed swivel guns. The 54 inch barrel of the wall gun is thought to have increased the range and accuracy. Tests conducted during the American Wars of Independence concluded that a wall gun could ‘hit a sheet of common paper at 600 yards’

Illustrated above, the flintlock wall gun with a East India short musket for size comparison.

The example in our May 27th 2021 has been made by Lacy to full military pattern for use by an independent military force such as the East India Company. The gun has all the standard features of a musket of the period except for being completely scaled up. Throughout history the gun has lost a few parts including the top jaw and screw as well as one side nail and ramrod but these parts can be bought from the Rifle Shoppe in Oklahoma and we can recommend importers who can acquire these parts for the potential purchaser. The Rifle Shoppe even sells a reproduction Yoke should you want to mount this gun to your house, castle or pickup truck!

To see a reproduction wall gun in action it is well worth checking out Mae from C&Rsenal firing one from the link below. 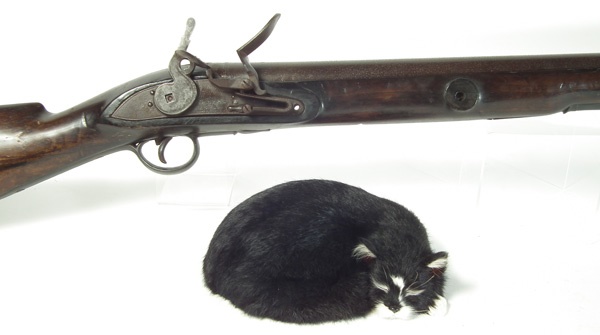