“My God Sir I’ve lost my leg!”, the legendary quote for which Henry William Paget (b.1768- d1854) will forever be immortalised in the history books. Paget uttered this when grapeshot ripped through his right leg at the battle of Waterloo 1815, “My God Sir, So You Have” was Wellington’s equally famous reply.

Henry William Paget is known for more than a just famous quote for the flintlock carbine which would have been carried by most cavalry troopers during the Battle of Waterloo is named after him. An example of which will be sold as part of our 9th September 2021 Arms and Militaria auction.

The Paget carbine was developed during the opening years of the 19th century as an improvement on the existing Elliot and 1796 cavalry carbines. With a 16 inch barrel, significantly shorter than its predecessors 26 and 28 inch barrels, and ramrod secured by a swivel the Paget carbine proved significantly easier to reload from horseback. When not in use, the carbine was secured safely to the trooper using a ring bar attached to the side nails which hold the lock in place.

It is debated how much Henry Paget actually had to do with the design of his namesakes carbine. The Royal Armouries in Leeds holds an early example with folding stock marked to the 16th (Queens) Light Dragoons for which Paget held rank of Colonel around 1800. The official date of introduction for the carbine is thought to be 1805 but it wasn’t until 1812 that it would have been in full production. Certainly by the time Paget was injured at Waterloo, the carbine would have been issued in significant numbers to many of the cavalrymen there.

The first thing you notice when you handle the Paget carbine is it’s svelte proportions. It is barely bigger than the long barrelled sea service pistols that the Navy carried on belt hooks. Everything seems scaled down on this dinky firearm until you turn to the business end which is still chambered to fire a thumping .650 lump of lead. There was mixed opinions from the cavalry men armed with the Paget. Whilst it was very handy, the 16 inch barrel did not allow a great deal of accuracy or range especially when loaded with the military issue paper cartridges. Later examples were issued with an 18 inch barrel as an attempt to increase its performance.

The example in our sale is an Board of Ordnance marked gun, it has the standard .650 calibre 16 inch sighted barrel with swivel ramrod. The lock is stamped with a Crown and GR and fitted with a safety catch. To the side is the saddle ring bar loop and the stock here is stamped, 'ID' . The butt has the BO stamp and the stock is fitted with brass furniture, the trigger guard being unit marked 6 0 5. 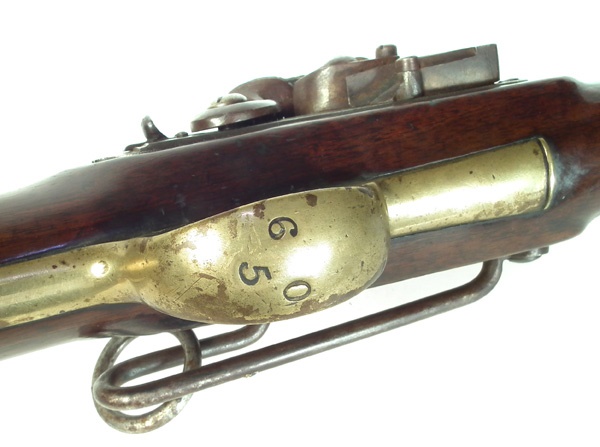 Paget carbines would have been plentiful during Waterloo but are less frequently seen in todays market. They fell to the same fate that the Baker rifle did and were sold off in large numbers to Mexico from where most never returned. The Paget in our 9th September sale is expected to sell for £2,000 – 3,000.

Should you have any items you would like to include in one of our Arms and Militaria auctions we would be pleased to hear from you. Please contact Chris Large on 01270 623878 or email chris@wilson55.com