A wearable souvenir of the Grand Tour

No self-respecting Georgian or Victorian gentleman would consider his education complete without embarking on the Grand Tour. This lengthy trip, undertaken by young European nobility following more formal studies, provided both the opportunity to admire the cultural legacy of classical antiquity and the Renaissance while rubbing shoulders with other members of polite society.

To demonstrate one’s full appreciation of classical art it was typical to return home with a souvenir. Hardstone intaglios - worn as finger rings and used as seals by every businessman in the Roman empire - were a common prize. Bought from merchants in Rome, they could later be mounted as jewellery.

The late 19th-century necklace offered by Peter Wilson on September 13 2017 is a spectacular example, comprising 27 amethyst, cornelian, agate, chalcedony and sardonyx intaglios set in yellow gold. It was entered for sale earlier this year by a local farming couple. Keen to research its history further, auction room specialist Helena Waudby made her own Grand Tour to Oxford to seek the opinion of Dr Martin Henig of the Institute of Archaeology. He was quickly able to identify the intaglios as Roman (rather than later copies) with most dating from the 1st century AD. Many of the carved subjects are birds and animals alongside other typical motifs such as a satyr, a charioteer and scenes from Greek mythology. Such a large cache of intaglios -  perhaps unearthed in a Roman drainage system or bath site - would have represented a significant find at the time. Designed to impress Victorian society with its combination of colour, elegance and erudition, it makes much the same statement today. It carries an estimate of £2,000 - 2,500. 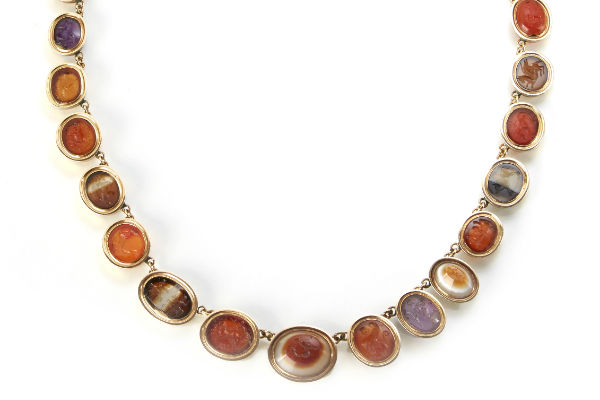