Squeezing out another bid

Helped by a revival of interest in traditional music - think Mumford & Sons - the market for the best antique concertinas has accelerated in recent years. Prices for some models have trebled across the decade. There was ample evidence of this at our fine art sale on July 5-6 when a cache of a dozen concertinas, sent for sale by a family from Penrith, sold to players and collectors from the UK and continental Europe for a total of £21,000.

Specialist Chris Large - himself a musician and a maker of string instruments as well as an auctioneer - described the 12 concertinas as ‘barn finds’. “The owner was an avid auction buyer and something of a hoarder” he said. “We’ve since found another Wheatstone and a vintage Alvis buried under detritus in an outbuilding.”

All concertinas assume the same basic ‘squeeze box’ design but most players focus on one of three distinct types: the English, the Anglo-German or the duet. English concertinas - as invented by leading maker Charles Wheatstone in 1829 - produce the same note when a key is pressed, regardless of whether the bellows are expanded or compressed. The classic model has 48 keys but other more sophisticated issues offer more notes, chords and the occasional duck quack or a flatulence key designed to add a little humour to the musicality.

Leading this collection at £5,400, well above its £700-1000 estimate, was a Wheatstone Aeola. It is eight rather than six-sided, bigger than most at 22cm wide and has 64 keys across its jet black endplates. The Wheatstone order books surviving in the Horniman Museum show this instrument (serial number 30824) left the factory on December 16, 1925.

The Anglo-German concertina - hugely popular during the middle and late 19th century - works more like a mouth organ, giving different notes when the bellows are ‘in’ and ‘out’. Charles Jeffries is the premier name. An itinerant brushmaker and an aspiring musician in his younger days, by the 1860s Jeffries had turned first to repairing and then to making Anglo concertinas. His instruments - categorised according to the keys arranged in two, three or four rows - are much coveted by Irish folk musicians.

There were two Jeffries’ in this collection, each stamped to the pierced metal endplates C Jeffries. A 39 key ‘four-row’ Anglo sold for £4300 while a 32-button instrument sold for £3,500. 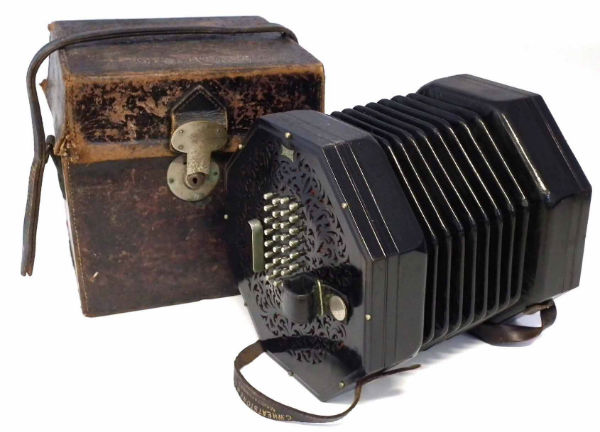 A Wheatstone Aeola concertina sold at £5,400