The man behind the art 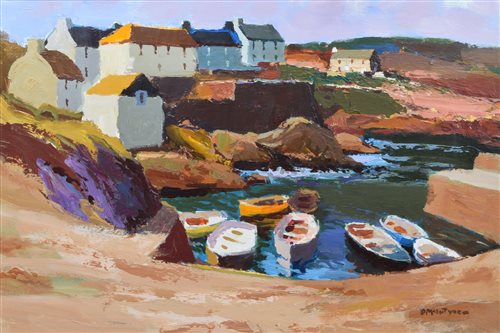 Although not perhaps a "Northern Artist" in the sense of portraying the urban landscapes of the North West Donald McIntyre is included in our specialist Northern Art Sales which also include Welsh and Scottish Artists.  His paintings of Iona, Cornwall and Wales continue to go from strength to strength in our sales and we are proud to hold the auction record for "Sunlight, Coverack" - a stunning image which we sold for a hammer price of £13,000.

Born in Leeds in 1923 to Scottish parents, Donald McIntyre spent his childhood in North West Scotland.  Although a keen painter from his youth, he initially trained as a dentist in Glasgow and it was during this period that he attended evening art classes at The Glasgow School of Art.  After qualifying as a dentist, he then served in the army and worked for the school services as Education Health Officer.  In the late 1950s Donald McIntyre moved to North Wales where he would remain until his death in 2009 and at the age of 40 left dentistry and began working as a full-time painter.  From North Wales, he kept with the traditions of many of the Scottish Colourists before him and continued to return to his beloved Iona each summer to paint.  The en plain air paintings from these trips to Iona now rank amongst his most popular in the saleroom and demonstrate the spontaneity and palette which Donald McIntyre gleaned from the Scottish Colourists and applied so beautifully to many coastal views from around the British Isles.

It was always a pleasure to discuss with Donald his paintings and on many occasions, he would kindly provide me with exact locations of works executed many years before.  It was during these discussions, however, that Donald raised with me the issue of forgeries and copies which were in circulation of his now sought-after work.  He regaled to me instances where he had contacted galleries and auction rooms to have works attributed to him erroneously removed.  This problem still persists in today’s market and it is for this reason if works by Donald McIntyre are acquired that they are bought from reputable auction rooms and galleries where provenance and authenticity are assured.  However, the often poor imitations have done little to detract from the artist's deserved reputation and subsequent increase in price at auction.  We are very proud to have sold so many beautiful examples of this fantastic artist's work at Peter Wilson's over the years and continue to attract sellers with the best examples who wish to achieve the strongest prices at auction.

A small but beautiful example of "Sand Dunes, Otters Point, Iona" measuring only 8 x 11 inches recently sold for a stunning £4,100 hammer at Peter Wilson Auctioneers and again confirmed the strength of this artist's market at auction.

To discuss any works you may have by Donald McIntyre for valuation or sale please contact our Paintings specialist Stephen Sparrow at stephen@peterwilson.co.uk