Why the Staunton pattern proved so popular

With the advent of international chess tournaments in the Victorian era, it became clear that a standard size and shape for the ancient game's 32 pieces was required. It was Nathaniel Cook's ‘Ornamental Design for a Set of Chess Men’ patented on March 1, 1849 that made the winning move.

The so-called Staunton pattern was named after the English chess master Howard Staunton (1810-1874) who penned a regular column for the Illustrated London News where Cook was editor. Daring in its pared-down simplicity, but relatively cheap to produce, its commercial possibilities were immediately grasped by the leading Hatton Garden purveyor of fine games John Jaques. It was a family affair: Jaques was Cook’s brother-in-law.

According to adverts in the Illustrated London News dated September 8, 1849, the first Jaques Staunton pattern sets were available in “the finest African ivory (5 guineas), boxwood and ebony (£1/15 shillings or club size (£2/5 shillings) and Wedgwood’s Carrara (£2/12/6 shillings)”. The first 500 sets were sold in distinctive gothic revival style carton-pierre boxes with labels hand-signed and numbered by Staunton with later versions carrying his signature in facsimile.

All sorts of minutiae are involved in the dating of these early issues - particularly subtle variations in the form and carving to the knights whose ‘horse of Selene’ design was borrowed from the Elgin Marbles.

The red-stained and natural ivory Staunton pattern set offered at Peter Wilson’s sale on Wednesday, September 13 is thought to date from c.1851-52. Crowns are stamped on the top of one of the rooks and knights of each colour while the kings (one stamped Jaques London) stand just under 3in high - just below the standard tournament size. Although the Continental carved wooden box is not the original, this early example of a classic and much-collected design is generating plenty of interest at its estimate of £200-300. Click here to view the lot. 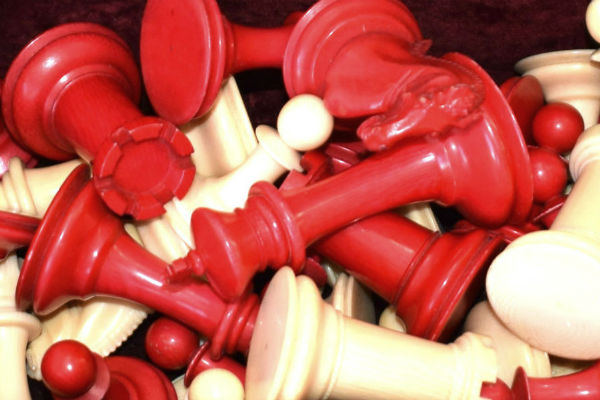