A ring boasting a royal provenance has been consigned into Wilson 55's forthcoming Fine Jewellery Auction & Watches Sale. Offered with an estimate of £3,000-5,000, this rose cut diamond, enamel and gold ring has centuries worth of history behind it.

This sensational diamond ring bears an inscription to the reverse pointing to its fantastic provenance. The reverse of the ring setting reads: 'Given by King Charles the 2nd to the Hon'ble Charles Bertie, Son of Montague Earl of Lindsey 1649'

Whilst the ring setting itself is later, the diamond is certainly in keeping for the time period. In ancient times, diamond crystals were simply polished along their natural octahedral forms, known as 'point cuts' and boasting a pyramid shape when set in jewellery. When diamond cutting began in around the 14th century, these octahedral crystals had one 'point' polished down, producing a table cut that remained popular for centuries.

By the 16th and 17th centuries, developments in cutting had ensured that multiple flat facets could be polished into a diamond using diamond dust, resulting in the rose cut diamond. The rose cut diamond is famously known as the 'candlelight' diamond, owing to the glimmering, twinkling shimmer that all those beautiful triangular facets reflect under candlelight that far surpassed the scintillation seen in table cuts.

The rose-cut diamond weighs approximately 1.50cts, in a beautiful oval outline with a fantastic depth and clarity. Indeed, when viewed under magnification there are only a few dark inclusions visible to the edge of the stone, the rest of the diamond is comparatively clean under the loupe.

Diamonds were gifted by Charles II, and we know this to be true by a famed example exhibited at the Met Museum, a diamond cluster gifted by the King to his famed mistress Nell Gwynne. This piece bears a similar inscription to the reverse, and has also been later re-set into a bodkin.

Above: Diamond-set bodkin from the Met Museum given by Charles II to Nell Gwynne and inscribed to reverse.

This ring was inherited by our current vendor's late husband, who bore a direct line to Charles and Montagu Bertie. The diamond was probably originally presented in a set of buttons, or a ring, perhaps to each of Montagu's five sons, but the present mount is later.

Montagu Bertie, 2nd Earl of Lindsey (1608-1666) was a royalist, supporting Charles I and raising a regiment of Cavalry in Lincolnshire at the outbreak of the Civil War. When his father Robert Bertie 1st Earl of Lindsey was mortally wounded, Montagu surrendered to be by his side. He was imprisoned in Warwick Castle, and wrote a defiant declaration of loyalty to the King. He was released in 1643 when he was appointed a Privy Counsellor and a colonel of the King’s Life Guards of Foot.

Lindsey was present at the surrender of Oxford in June 1646, attended the King in 1647, and finally served as a commissioner for the Treaty of Newport in 1648, a failed treaty between Parliament and Charles I intended to end hostilities. He continued to attend the King during his trial and even accompanied the King's body to its burial. Montagu paid heavily for his allegiance, compounding for his estates in December 1646 at £4,360 (later reduced to £2,100), a sum he did not pay off until 1651.

Charles Bertie was the fifth son of the Earl of Lindsey and would have been around nine years old in 1649 when the diamond was reputed to be given by King Charles II. This significant year marked Charles I’s execution, and Charles II’s appointment as King of Scotland in February. Whilst living in The Hague, it is likely that Charles II commissioned this token as a gesture of thanks for the family’s loyalty and service to the Royalist cause. 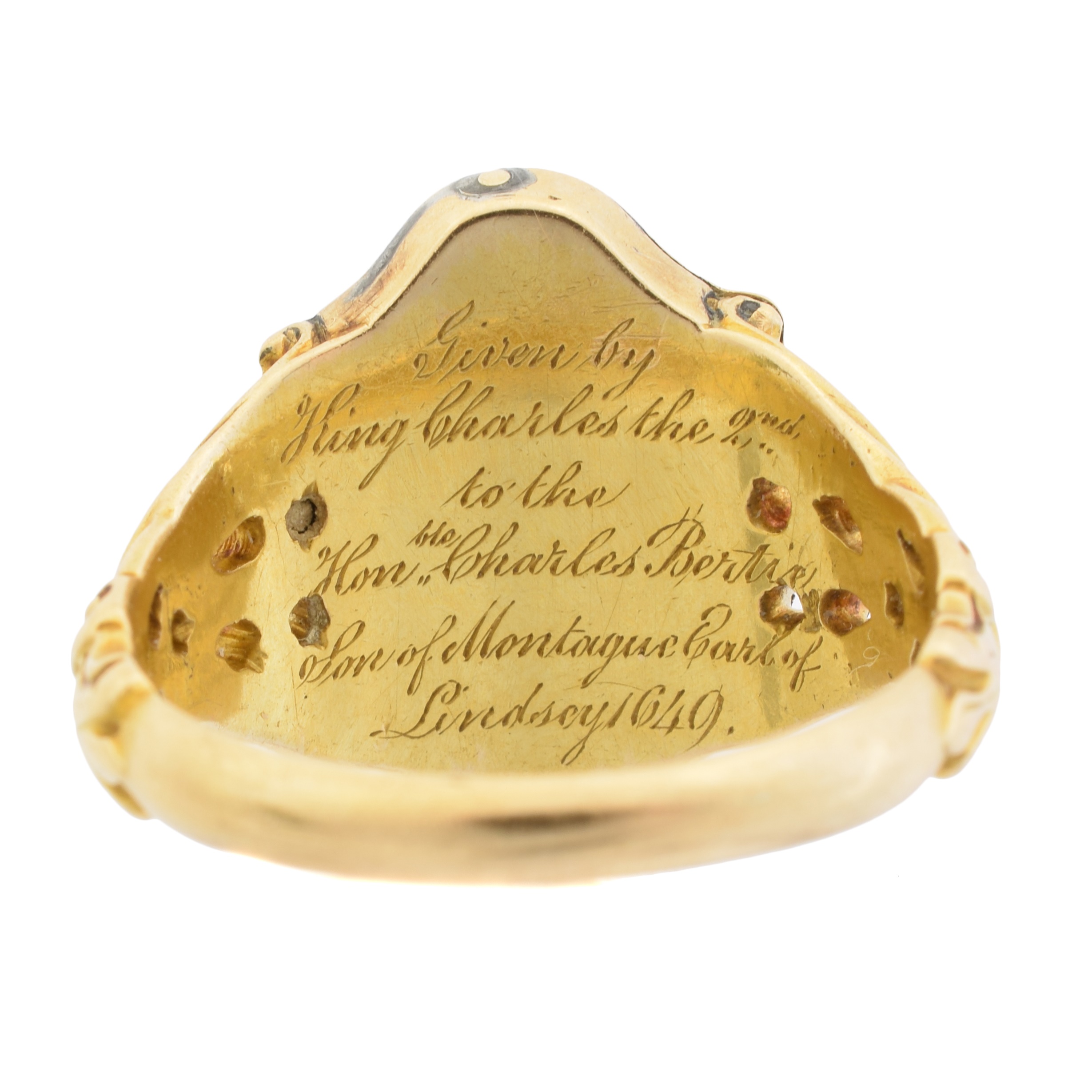 Passed down by descent and marriage to our current vendor, this captivating ring bears a significant piece of British history, and has been kept, unworn, for hundreds of years. In fantastic condition, this exceptional piece is expected to garner the attention of serious collectors, museums and history lovers throughout the UK. It will sell on Thursday 17th June, and the full lot listing can be viewed here.

For further information on this lot, or any of the other lots in our Fine Jewellery & Watches Sale contact Liz Bailey via liz.bailey@wilson55.com